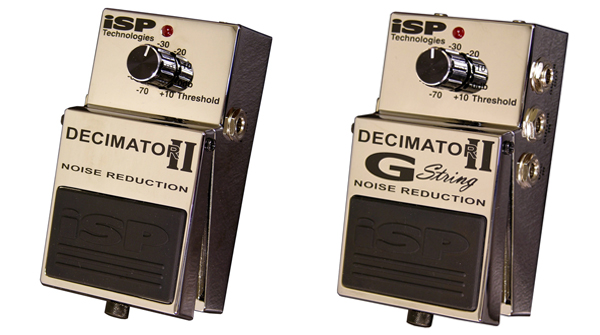 A brand new updated version of both ISPTechnologies Decimator II and Decimator G String II pedalshave now been released by the Michigan based Pro Audiodevelopers.

ISP Technologies introduces the Decimator II,second generation of the Decimator Noise reduction. The DecimatorII includes improved performance and innovations so unique that itis covered under two new patents pending for these new innovativeimprovements.

The Decimator II also features improvements in the expandertracking with our new Linearized Time Vector Processing. This novelimprovement provides a more linear release timeconstant responsefor the exponential release curve of the downward expander. Whilethe expander is exponentially increasing expansion and dynamicallychanging its response to fit the envelope of the input signal, therelease response remains linear over a given time period. Thisincreases the smoothness of the release response of the expanderand provides the most transparent release response of any noisereduction system available and virtually eliminates any releaseripple for incredibly smooth decay of longer sustained notes.

The new Decimator II and Decimator G String II now include aLINK IN and LINK OUT allowing two pedals to be linked via a common1/8 inch Tip/Sleeve or Tip/Ring/Sleeve phone cord allowing bothpedals noise reduction signal processing circuits to track thedirect instrument input. With two Decimator II pedals linked theguitarist will get close to the same level of performance availablein our professional Decimator ProRack G system in pedal form. Thiswill now allow players to use one block of Decimator between theguitar and input of the amplifier, a second in the effects loop,use dual preamps in a system with a Decimator II after eachpre-amp, or implement true stereo noise reduction systems usingthis link connection. Using the LINK function between two pedalsallows a number of options. By using a standard Decimator IIbetween the guitar and the input of the guitar rig and a secondstandard Decimator II inserted into the effects loop, the playercan achieve the same basic performance of the professionalDecimator ProRack G. The guitarist can also use a Decimator GString II at the front end of the system and build a true stereonoise reduction system by linking a standard Decimator Il pedal.This allows two totally independent channels of Decimator NoiseReduction, with separate inputs and outputs, to be inserted after astereo Pre-amp or connected in a stereo guitar rig.