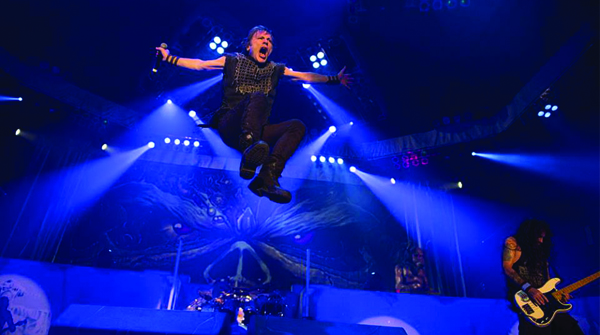 Next month Iron Maiden will see out their current 'Maiden England' European tour with their final UK date at London's O2 Arena. However after completley selling out in just under 12 minutes the Heavy Metal titans have now added a second London date which will go ahead on Sunday 4th August.

"We've all been having such a fantastic time on this tour," says Maiden frontman Bruce Dickinson.

"From the very first show in North America last year to the European dates we are doing now, it's just been tremendous fun. Our fans have been brilliant as usual, and seem to be loving the set-list and the stage production! So we thought that because this tour has been such an amazing experience for band and fans alike, it somehow seems right to finish up back home in England and have the final show celebration on home-turf. And now instead of one night's celebration back home we get to have two!!"

The band will also take extra steps to make sure their fans get fair and proper access to tickets whilst not paying over the odds through third-party and second hand brokers by announcing the show will be totally ticketless.

"We are all very pleased to see the first show sell out in such a short time so we can now round off this part of the tour back home and celebrate for two nights instead of one," adds band manager Rod Smallwood. "I am certain that both nights will be memorable. We used Ticketless (Paperless) Ticketing on our North American Tours in 2010 and 2012 and it worked extremely well and we received many positive comments back from our fans. With Ticketless (Paperless) Ticketing, only those who actually pay initially for the tickets will get into the show so scalping is generally avoided. We are also doing everything we can to avoid any drain of tickets going to the Secondary Ticketing sites which we feel make unfair profits from music fans and often lessen the number of tickets available to these real fans, especially at the on sale."

Following the O2 London dates, Iron Maiden will then take a short break before venturing to North America, then Latin American stadiums and the Rock In Rio festival in September. They will then finish the tour off with a return to the Estadio Nacional in Chile on October 2.