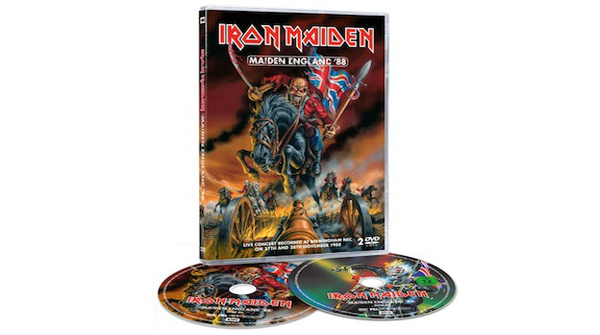 The show was recorded at the Birmingham NEC on 27th & 28thof November 1988 and the set-list whic featured a the iconictwo-night show went on to act as a basis for the heavy metal eldersmost recent North America tour.

The upcoming 'Maiden England '88′ liverelease will be available as a double CD as well as digital audiodownload, limited edition double picture disc vinyl and of courseas a double DVD. Disc one will contain the classic'Maiden England' concert in full alongwith three previously unreleased encores of 'RunningFree,' 'Run to the Hills' and'Sanctuary.'

Disc two will offer extensive bonus footage documenting Part 3 inthe 'History of Iron Maiden.' The 40-minute rock-umentaryfeatures interviews with each Maiden member along with manager RodSmallwood. The second disc will also include 5 re-mastered promovideos and the 1987 documentary 'Twelve Wasted Years,'which will be the film's DVD debut.

"We've been busy upgrading this concert footage for a longtime, with our in-house Film Producer and Director Andy Matthewsworking tirelessly to weave his magic yet again!. The 1989 VHSvideo has been largely unavailable for many years and we know howeagerly our fans have been awaiting the new version so we wanted togive it the best possible treatment. The current Maiden EnglandWorld Tour which continues later this year revisits much of the setlist and production from the initial 1989 VHS release so it will beinteresting to compare just how much has changed in terms of our2013 live show production, especially with all the advances inmodern technology and the improvements we've been able to make tothe set."

The History Of Iron Maiden - Part3

Check out the trailer Iron Maiden's'Maiden England '88′ DVD below.