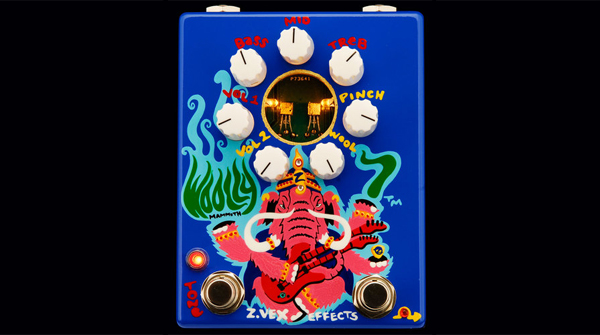 (PRESS RELEASE): The holiday season is in full swing and to celebrate we're releasing our newest product, The Woolly Mammoth 7.

The Woolly Mammoth 7 is an expanded version of our mighty Woolly Mammoth. The Woolly Mammoth 7 packs all of the subharmonic wallop and ripping fuzz of the original Woolly Mammoth but with added custom tweaks to make it even more versatile.  These additional features include a Marshall™ style tone stack with bass, mid and treble controls. It also has a dedicated footswitch to turn the EQ on and off, and independent volume controls for EQ on (Vol 1) and EQ off (Vol 2). And of course we’ve included our Plexiglas® window to see where the magic happens. The evolution of this massive beast continues.

What ZVEX says about The Woolly Mammoth 7 (via website):

"The WM7™ features a Marshall ™ style tone stack with Bass, Mid, and Treble controls. This is a departure from the original Woolly with its single tone knob. The tone stack allows for expanded tone shaping capability. Being able to switch it in and out of the signal path makes it a valuable tool for sculpting fuzz into dense soundscapes. The tone stack is switched in and out of the circuit with the footswitch on the lower left portion of the pedal. This feature allows you to bypass the tone circuit completely. The WM7™ fuzz without EQ has its own unique voice, much different from the sound of a WM7™ with tone stack, or the single tone knob of the standard Woolly Mammoth™. The fuzz is more linear, with pronounced mid frequencies."