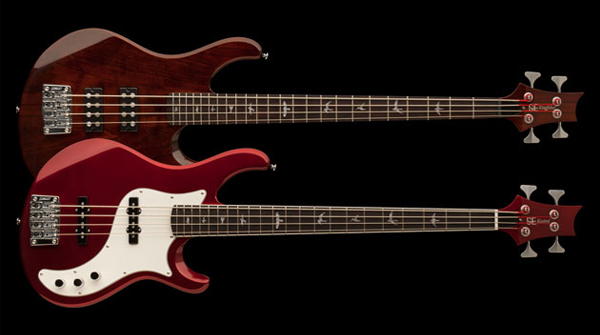 The Kingfisher and Kestrel are the first two bass models to feature in PRS' popular SE Series. Designed in the surroundings of PRS’s Maryland shop, each feature neck through construction for sustain and evenly balanced tone, but are both very distinctive instruments.

The SE Kingfisher is a huge-sounding bass with distinct old-school tonal character that delivers that huge “clacky” tone missing from some modern basses. Featuring a Swamp Ash body, 24 fret maple/walnut neck, and 34” scale length, this bass is instantly comfortable for players old and new. Kingfisher (4B ‘H’) proprietary pickups are deep, thick-sounding humbuckers with plenty of top end clarity and punch. The sparkling highs and the Kingfisher’s high midrange growl allow the bass to cut through the mix while holding down the band with its sweet warm fundamental tone. The SE Kingfisher bass will be offered in a variety of finishes, including Natural, Scarlet Red, and Tortoise Shell. For full specifications, videos, and audio samples, visit http://www.prsguitars.com/sekingfisher.

The SE Kestrel takes a traditional singlecoil bass platform and adds PRS’s fit, finish, and attention to detail, delivering a new take on a classic instrument. Starting with an Alder body, 22 fret maple/walnut neck, and 34” scale length, the Kestrel is instantly familiar. A modern bridge allows you the choice of strings through the bridge or the body to yield even more tonal possibilities. Kestrel (4B ‘S’) pickups are extremely punchy and focused, giving players the ability to walk a low-mid focused blues line, articulate a high-mid focused fretless part rich with harmonics, nail the scooped midrange and sweet top-end sound slappers favor, and wield a razor sharp blistering rock bassline. This bass has growl to burn! The SE Kestrel will be offered in Black, Metallic Red, and Tri-Color Sunburst.