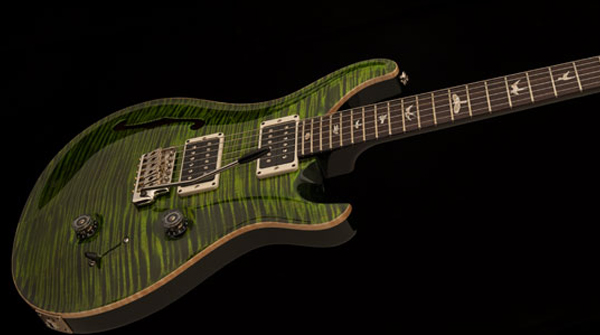 PRS Guitars' new Custom 24 Semi-Hollow model is the first of its kind, marking the first PRS model released featuring a semi-hollow body with an f-hole in the company's history. Unfortunately, however,  fewer than 200 of these instruments will be made for this small batch run.

The 2014 Custom 24 Semi-Hollow has all of the versatility and reliability of the Core Custom. The addition of a chambered, semi-hollow body gives this guitar added midrange and resonance while losing none of the instrument’s tried-and-true character.

Color options include PRS’s most popular current offerings: Aquableux, Black Gold, Blood Orange, Faded Whale Blue, Jade, Obsidian, Red Tiger, and Violet. Fewer than 200 of these instruments will be made for this small batch run.

The Custom 24 is the original PRS guitar – the guitar Paul Reed Smith took to his first NAMM trade show in 1985. Due to its extreme versatility and reliability, the flagship model has since become indispensable to countless musicians in the studio and on the stage.

Through the years, the Custom 24 has evolved with the PRS craft and has been offered in several varying configurations, but never with an f-hole until now.