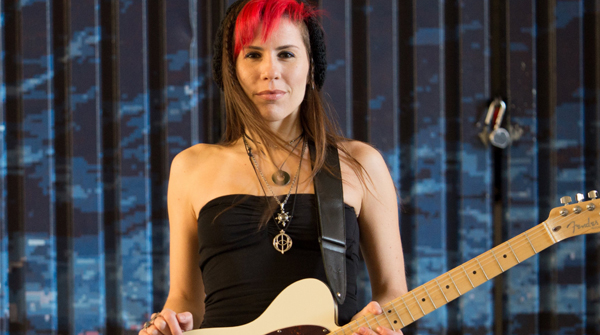 Irene has very kindly composed a number of licks exclusively for the Gi faithful. In it she incorporates Van Halen, Paul Gilbert and Yngwie Malmsteen influences with some tremolo picking, string skipping and sweep picking tricks - Enjoy..

Born in Ioannina, Greece, Irene Ketikidi started playing electric guitar at the age of 15. Influenced by a variety of rock, pop and electronic bands during her teens such as Pink Floyd, Jimi Hendrix, Michael Jackson, Oasis, Texas, Skunk Anansie, the Prodigy and Daft Punk, she took some lessons from a local teacher, developing the basic skills and spending the first couple of years working out her favourite tracks by ear and jamming with bands.

In 2001, Irene relocated to Athens, where she studied music at the Philippos Nakas Conservatory, part of the Berklee international network partners, allowing her to expand her knowledge of music and graduating with a diploma in Jazz Harmony & Theory in 2003. She also studied privately with top Greek instructor Theodore Ziras and by this time, influences were expanding to include Eddie Van Halen, Joe Satriani, Steve Morse, Paul Gilbert, Steve Vai and Richie Kotzen as well as classic blues and rock legends such as Eric Clapton and Stevie Ray Vaughan. In 2007, she relocated to the UK to attend London’s prestigious Guitar Institute (ICMP) and graduated in 2010 with a Bmus degree and a level 6 Licentiate in teaching music, while also complimenting her studies with UK leading rock specialist Martin Goulding.

Since graduating, Irene has performed/worked with electropop London band Red N Pink, pop singer Cherry Lee Mewis, hip hop artists AKS and JTheex, afrobeat trombonist and percussionist Toli Nameless, melodic metal band GraVil, RnB singer/songwriter Ruchelle Scott, Eurovision vocalist Maja Slatinsek and has been featured in many artists’ recordings. She has toured extensively with female tributes “The Femones” (Ramones) and “Back:N:Black” (AC/DC), as well as various session gigs including performances at the biggest venues in the UK and Europe’s festival stages. Most recently she was the lead guitarist and guest actor at at London’s West End play “Julius Caesar”, directed by the award-winning Phyllida Lloyd (Mamma Mia, The Iron Lady) and toured with Nashville country singer/songwriter Colm Kirwan, 2X Emmy winner singer Victoria Shaw and Heidi Feek. Over the years, Irene has also worked on side projects with session musicians of The Darkness, Saint Saviour, Elsie LC, Adam Bomb, We Will Rock You and Thriller Live West End shows and X Factor UK.

Irene has also contributed tuition columns to the Guitar Website Live4Guitar.com and was a guest instructor and course writer at the 2010 and 2011 International Guitar Foundation courses in London.