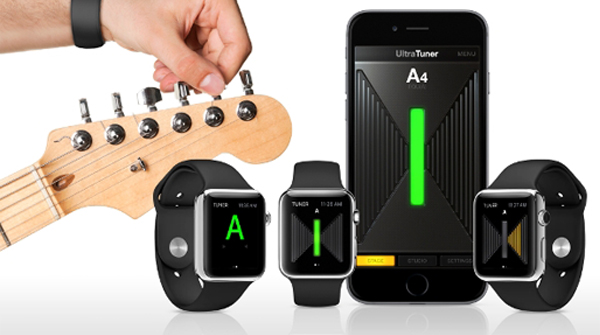 IK Multimedia announce the UltraTuner, the first Apple Watch-compatible app to be released by the forward thinking music software developers.

(PRESS RELEASE): IK Multimedia, the pioneer and leader in mobile music creation, is pleased to announce that the latest version of UltraTuner™ for iPhone is now compatible with Apple’s newest device, Apple Watch. Now musicians can accurately tune their instruments straight from their wrist — UltraTuner’s highly visible “STAGE mode” can be viewed on Apple Watch via 2 easy-to-see visualizations. Now it’s even easier than ever before for musicians to keep their instruments in tune no matter whether they’re on stage, in the studio or anywhere in between.

The latest UltraTuner app can be paired with an Apple Watch when it is installed on an iPhone with the most recent OS. Musicians can now view the tuning information on their Apple Watch in 2 operational modes: UltraTuner’s classic graduated LED “STAGE mode” and a simple “NOTE mode”, custom-designed for the Apple Watch display.

Beyond the Apple Watch enhancement, the UltraTuner app runs on both iPhone or iPod touch, and can receive an audio signal via either the built-in microphone or through an audio interface like IK’s iRig® HD, iRig 2 or iRig PRO. It sports an advanced and astonishingly quick note-detection engine that delivers accuracy down to +/- 1/100 of a cent, making it ideal for precision tuning and calibration of all instruments from electric guitars to analogue synthesizers and beyond.