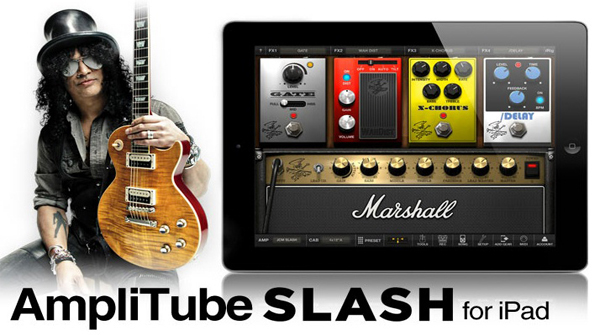 IK Multimedia has announced the release of the AmpliTube® Slash,the official Slash apps and software that let you play, practiceand record with Slash's signature pedals and amplifiers on theiPhone®, iPod touch®, iPad® and Mac®/PC

All versions of AmpliTube Slash feature models of the signaturegear used by Slash in the studio and for his live performances. Nowusers can rock with models of the legendary Marshall® amplifiersused by Slash together with his signature guitar pedals. Alsoincluded is a comprehensive collection of Slash's guitar tonesettings provided as starting points for tone tweaking or playingalong.

Additionally AmpliTube Slash provides a fully integratedmulti-track recording studio for capturing ideas quickly and easilyor producing entire songs and compositions. A robust song playersection gives users the ability to play along with songs or backingtracks by importing them directly from their device library orcomputer.

"My new album, Apocalyptic Love, was entirely written while wewere on tour," states Slash, adding, "If we are not performingwe're traveling, so there is little time for creating music. Byusing my iPhone along with IK's AmpliTube and iRig I was able tocapture whatever ideas I had swimming in my head, usually around4am."

"AmpliTube iRig comes in really handy for on-the-go practicing,recording, or just jamming on different ideas - even if it's on thebus - it's right with me all the time", Slash adds, "I'll do sometweaks on the Marshall's, but there are also different effects thatare available including distortion, chorus, auto wah and more."

IK have worked closely with Slash to model his entire rigcomprised of 2 must-have classic rock amplifiers - the Marshall JCMSlash Edition Silver Jubilee and the Marshall AFD100 - bothequipped with Slash's favourite 1960 Marshall speaker cabinet.Together with these sought-after amplifiers users will be able tochoose from 6 stompbox effects that includes Slash's signatureDelay, Gate, Octave/Fuzz, Chorus, Booster and Wah/Distortion. Therig is fully configurable so that the signal chain can be freelycustomized depending upon the device used: 3 stompbox effects intoan amp and cabinet on the iPhone/iPod touch; 4 stompbox effects andamp/cabinet/mic on the iPad, and up to 12 stompbox effectcombinations into dual amp/cab/mic/room on the Mac/PC.

AmpliTube Slash is the latest addition to the family of officialIK guitar and bass products that, thanks to IK's unmatchedmodelling technologies, features products with the best names inguitar effects and amplification such as Fender™, Ampeg®, Orange®,Soldano™, Seymour Duncan™, T-Rex® as well as legendary artist JimiHendrix™.

Hook up with Slash

The AmpliTube Slash for iPhone and iPad apps are now availableon the App Store? at an introductory price of $9.99/€7.99.

Existing users of AmpliTube for iPhone, iPod touch or iPad canpurchase AmpliTube Slash as an in-app purchase for $9.99/€7.99, orindividual models a la carte starting at $2.99/€1.99.