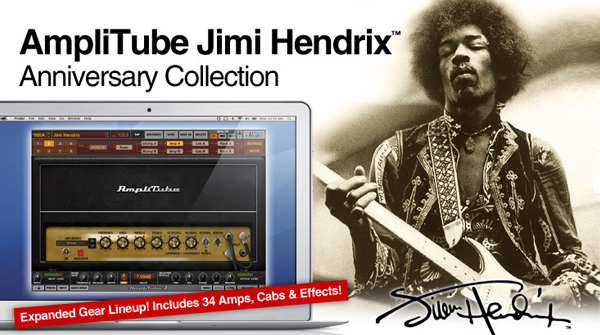 Named to commemorate the recent 70th anniversary of Jimi Hendrix'sbirthday, the new collection runs inside the AmpliTube Custom Shopsoftware, which can be used as a DAW plug-in or as a standaloneapplication, featuring a built-in 4-track recorder andspeed-trainer. In addition to being released in the collection, allthe Hendrix models are now available for à la carte purchase fromthe Custom Shop.

New gear in the collection:

The SilverTwelve (model is based on theSilvertone® Twin Twelve 1484) is a 60W tube head with a separate2x12 cabinet, which Hendrix used in the early part of his career.The amp produces a powerful clean sound and a gritty distortion,and has stood the test of time from the psychedelic era through theGrunge period and into today's modern rock.

The JH Gold (model based on a Marshall® JTM 45)is "the" amp that Hendrix used almost exclusively from 1968 on. Heliked to crank it to full volume and chain multiple heads toproduce a huge, mind-blowing wall of sound. The new model has beenreworked from the ground up, using IK's DSM™ and SCC™ modellingtechnologies, and includes both the Normal and Treble channels,plus fully modelled channel bridging.

The JH 1200 (modelbased on the Sunn® 1200), is a high-powered tube bass head.Concertgoers at any Hendrix show between 1967 and 1968 would haveseen an entire backline consisting of Sunn amps and cabinets. Aswith many amps from the psychedelic era, the ultra-loud 1200 waspopular with both guitarists and bass players.

The EP Tape Echo(model based on the Maestro® Echoplex) is the gold standard ofvintage tape-echo units. Hendrix liked experimenting with it toproduce wild psychedelic effects in the studio, and he used itheavily during the recording of Electric Ladyland.

Because all the Hendrix models are available in the Custom Shop,users of other AmpliTube versions, including the free AmpliTubeCustom Shop, have access to these models for individualpurchase.

The Custom Shop is the IK exclusive online gear shop and isintegrated into AmpliTube software and plug-ins. It provides userswith a huge range of amps, cabinets, microphones and effects thatcan be purchased individually. The "Try Before You Buy" featuremakes it possible to download a fully functioning version of anymodel to audition it prior to purchase.

The AmpliTube Jimi Hendrix™ AnniversaryCollection is the latest addition to the IK family ofguitar and bass products that, thanks to IK's unmatched modellingtechnologies, offers products with the best names in guitar effectsand amplification such as Fender™, Ampeg®, Orange®, Soldano™,Seymour Duncan™, T-Rex®, and the rock icon Slash™.

The full version of AmpliTube Jimi Hendrix™ AnniversaryCollection is available for €79.99 (ex VAT), as a digitalserial-number delivery that can be purchased inside the AmpliTubeCustom Shop or from the IK Online Store. Previous users ofAmpliTube Jimi Hendrix™ and AmpliTube 3 are be eligible for aspecial upgrade price of only €29.99 (ex VAT) for a limited time.Each of the new models will also be available individually insidethe AmpliTube Custom Shop with a price ranging from 20 to 30 GearCredits - the currency used inside the Custom Shop for single gearpurchases.