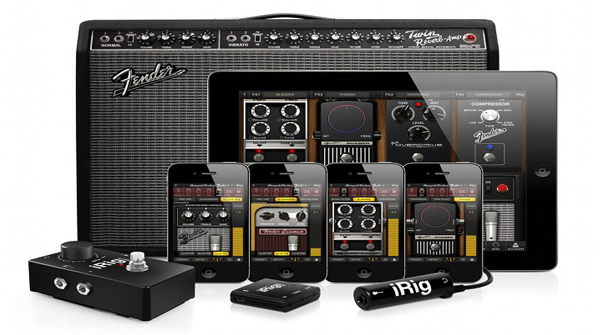 IK Multimedia - the leading brand of iOS music-making apps andaccessories - announced today a major update of AmpliTube Fenderfor iPhone, iPod touch and iPad. With over 480,000 downloadsAmpliTube Fender is the standard guitar and bass amp and effectsprocessor app when it comes to rocking out with legendary Fendertone on mobile iOS devices.

At its most basic level, AmpliTube Fender for iPhone, iPod touchand iPad is an incredibly fun, intuitive guitar and bass rig thatallows players to jam anywhere with world-class Fender tone.AmpliTube Fender features the essential Fender dream machines,including amplifiers like the '59 Bassman®, the Fender '65 TwinReverb®, the Super-Sonic™, the '65 Deluxe Reverb® and the ProJunior™, plus Fender stompbox models - the Fender Blender™,Overdrive, Tape Echo, Phaser and Compressor.

AmpliTube Fender version 1.2 elevates the app to a completelydifferent live performance level by allowing players to control theapp using standard MIDI controllers. With a MIDI interface - likeIK Multimedia's iRig MIDI - players can now use AmpliTube Fender"hands free" in the studio or on stage by controlling everyAmpliTube parameter or preset from their existing MIDI floorcontrollers or any other type of standard MIDI controllers.

The new AmpliTube Fender 1.2 packs a multitude of newfeatures:

Full MIDI Integration. This feature allows users to controlAmpliTube Fender 1.2 via standard MIDI controllers using an iOSMIDI interface such as iRig MIDI. This allows to remotely switchpresets or to control each knob, switch or controller on theinterface with a physical controller. The feature is available asin-app purchase and it is free for iRig MIDI users.

New Mixer section. A new mixer interface has been added to therecorder allowing easier control of master reverb send, channellevel, pan control, mute and solo buttons, plus an FX button forapplying the AmpliTube signal chain to the recorded material on theindividual channels. This feature also allows "re-amping" of tracksto get that perfect tone or to apply different creative techniquesto the material post-recording.

New Copy/Paste function. Now users can copy or paste audiomaterials to and from other apps that support this feature, or copythe content of one channel in the mixer to another channeleasily.

Restore in-app purchases. By using the new Restore Purchasesfeature, simplifies the update process for users that has purchasedmore gear via in-app purchase.

Export audio via SoundCloud or FTP. In addition to exportingrecorded material using email and file sharing now users will beable to easily upload and share their materials online on FTP orvia SoundCloud.

Retina Display support. AmpliTube Fender 1.2 now has an evenmore elegant interface designed for higher resolution retinadisplays both on iPhone and on the new iPad.

For more information on the range of IK Multimedia audiointerfaces for iPhone, iPod touch and iPad, please visit: