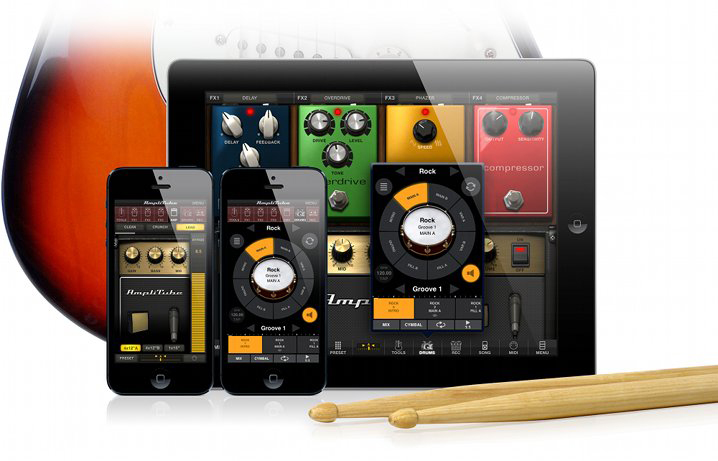 With Loop Drummer available inside of AmpliTube,users can jam and practise over single loops or entire drumsequences, or they

cancompose a full-length drum track (with intro, groove variations,fills, and ending) to be used as a start-up rhythmic base forrecording full multitrack compositions on the AmpliTube recorder.All of this can be done inside the app.

Loop Drummer sports over 500 loops, which are available in avariety of popular styles including Rock, Blues, Country, Metal,Funk, and more. Loops are grouped in "Style Packs" containing up to64 different loops for each of the available styles, which areorganized in 8 "songs" with 8 loops each, including intros, outros,fills, and alternate parts.

Loop Drummer's powerful and unique Remix feature allows theproduction of an entire drum track with a single tap, using anintelligent algorithm that sequences the loops, structuring a songas a producer would do. At each tap on the Remix button, a newtrack is generated. This allows for the creation of endlessinspiring grooves for jamming, practising, or for use incomposition.

Alternatively a drum part of any length can be produced bydragging loops into the timeline. Any of the loops can also becustomized with the Cymbal button, which sets a crash on thedownbeat.

A Tap Tempo button is also available for easily changing looptempos, and the module is equipped with a high-qualitytime-stretching algorithm that automatically processes the loopswhen the tempo is changed. As a result, the loops are usable at awide range of tempos with no effect on quality.

Loop Drummer has its own built-in mixer controls, with a coolcircular volume control that allows for adjusting the overall drumlevel, independent of the recorder's volume, and also functions asa reverb send.

In addition to Loop Drummer, the new AmpliTube 2.9 adds a handynew feature to the recorder, a pre-roll function that can be turnedon and off. The pre-roll gives the musician who's recording twomeasures to lock in on the groove before recording starts, makingit easy to play in tempo from the very first beat.

AmpliTube 2.9 is available for €17.99 from the AppStore for iPhone, iPad and iPod touch or at AppStore.com. The AmpliTube App includes LoopDrummer with a free set of 8 loops from the Rock style pack. Eightadditional Style Packs (each containing 64 loops) can be obtainedvia In-App Purchase for €3.59 each. The complete collection isavailable in the All Style Pack bundle, which sells at thediscounted price of only €13.99.

For more information, go to www.ikmultimedia.com/loopdrummer