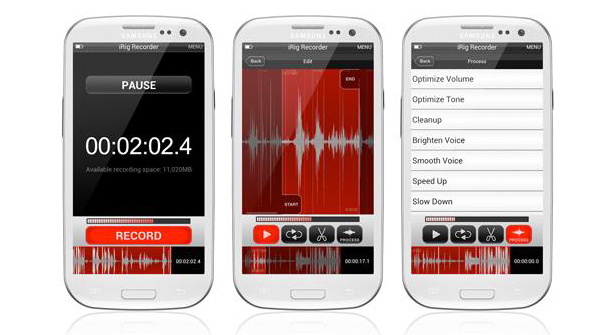 IK Multimedia - the leader in mobile musiccreation apps and accessories - is proud to announce iRig® Recorderfor the Android operating system. iRig Recorder is a powerful audiorecording and editing app that turns a mobile Android device into aprofessional field recorder, and makes it easy to captureinterviews, classes, rehearsals, music performances,lectures,  and more, with outstanding quality. When used withthe IK range of mobile microphones and accessories for Androidincluding iRig MIC, iRig MIC Cast and iRig PRE, iRig Recorderprovides a complete, ultra-portable solution, to any recordingneeds on the go for the popular Android platform.

iRig Recorder is a simple to use audio recording app that canstart recording immediately when it is launched making it theperfect "on the spot" field recorder. Users simply launch the appand hit the record button, or can also configure the app to startrecording audio immediately upon launch. The app automaticallygroups recordings by date, tags them with geographic locationinformation, and saves the original file as a backup. Recording time is limited only by the available memory on thedevice. iRig Recorder can be used with the built-in devicemicrophone, or for superior sound quality can be used with IK'siRig MIC handheld microphone, iRig MIC Cast compact devicemicrophone, or iRig MIC Pre professional studio XLR microphonepreamp, all designed for capturing broadcast quality audio on thego.

Recording is only part of the story with iRig Recorder. It alsoprovides a precise waveform editor, which allows for selecting,cutting, and cropping of the audio content. Automatic onboard audioprocessing options can optimize recording levels and tone, removebackground noise and increase the overall audio quality so thatanybody can produce professional quality audio with no formaltraining.

The app can also speed up or slow down a recording withoutchanging the timbre. With its onboard processing and editingfeatures, it's possible to produce podcasts or other types ofprogramming, all without leaving the app.

Finished recordings can be easily shared by e-mail and FTP, overBluetooth, through USB cables, from an SD card, or via appsinstalled on the device. Files can be exported as CD-quality WAVfiles, or as compressed .ogg files, ranging from 64 to 192kbps.

A free version of iRig Recorder is also available, whichprovides the same recording, level-optimization and export featuresas the full version, and users can add the editing and additionalprocessing via in-app purchase.

IK Multimedia is the leader in mobile musiccreation accessories and offers several external miking options forthe Android platform that allow for the capture of higher qualityrecordings than can be obtained with a device's built-in mic. iRigMIC is a quality handheld mic designed for both close- anddistance-recording applications. iRig MIC Cast is an ultra-compact,high-quality personal mic that attaches to the mobile device. iRigPRE is a mobile mic preamp that allows for the use of professionalXLR microphones with. It even has phantom power for condenser mics.All of IK's microphone products allow for real-time monitoring ofthe recordings thanks to their included stereo output connector forheadphones or speakers.

For more information, go to www.ikmultimedia.com/irigrecorderandroid