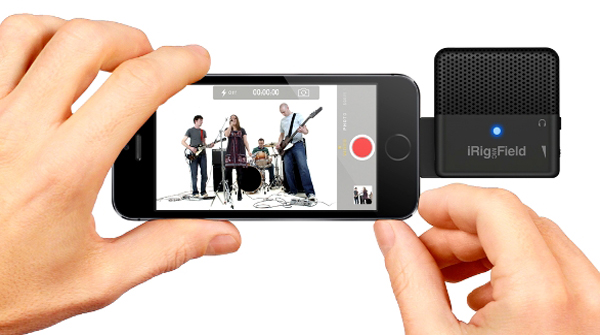 iRig Mic Field is the only mobile digital microphone designed to be used for both video and audio projects. It delivers superb stereo sound for both formats by connecting directly to your iPhone, iPad or iPod touch's digital input via its Lightning connector. Its two high-quality cardioid electret condenser capsules, 24-bit audiophile-grade A/D converter (with 44.1/48kHz sample rate), 115 dB maximum SPL rating and built in low-noise, high-definition preamp give you the tools to capture pristine sound no matter whether you're recording a rehearsal or a concert, capturing audio for videography, saving a lecture or speech, acquiring found audio for a music project or recording instruments while on the move - iRig Mic Field lets you create accurate and faithful field recordings in every context you can imagine.

To better preserve the stereo image while recording audio for video, iRig Mic Field features a conveniently rotatable patent-pending design. With the touch of a finger it can be easily rotated 90 degrees and locked in one of two positions for the best stereo image in both landscape and portrait modes. Now you can get an accurate signal from both left and right channels in any situation - in other words, it surpasses comparable mobile microphones that only produce a true stereo sound when held in portrait mode.

iRig Mic Field is as lightweight and portable as your mobile device. It has a slim form-factor, fits flush on your device and slips easily into your pocket when finished. iRig Mic Field has been designed with elegance and durability in mind: It looks good and can withstand the rigours of travel thanks to its durable industrial design and protective carrying pouch.

Video production in your pocket

iRig Mic Field has also been designed with mobile video in mind. It lets you record and upload video with crystal-clear audio to all of your favourite sharing sites and services, like YouTube, Facebook, Instagram, Vine and more. It's never been easier to shoot a video and share it with your friends, followers and fans. Now musicians, videographers, journalists, podcasters, casual users and more can get high-quality sound while on the go without sacrificing mobility or audio fidelity.

Record with the power of apps

For immediate recording, iRig Mic Field comes fully equipped with IK's powerful iRig® Recorder for iPhone, iPad and iPod touch. It lets you quickly record, edit, process and share your audio, thanks to its intuitive GUI, 8 effects and social sharing capabilities. iRig Mic Field also works seamlessly with iOS' Core Audio and Core Video apps like GarageBand, Voice Memo, Camera and iMovie. All you have to do is plug in your iRig Mic Field, open your favourite app and hit record: You'll have a high-quality recording in no time. The iRig Recorder App is available from the App StoreTM on iPhone, iPad and iPod touch or at www.appstore.com/irigrecorder

Combine its effortless portability, 24-bit digital audio converter, plug-and-play app compatibility, built-in preamp, easy monitoring via LED and headphone out, proper stereo image in both portrait and landscape orientations, input gain control and sleek design, and iRig Mic Field stands out as the smallest and most full-featured portable field microphone for iPhone, iPad and iPod touch. And best of all, it gives you all this at a price that's half of comparable microphones that weigh over twice as much and offer far less flexibility while on the go.

iRig Mic Field will cost $99.99/€79.99 (excluding taxes) and will be available from music and electronics retailers worldwide in October 2014.