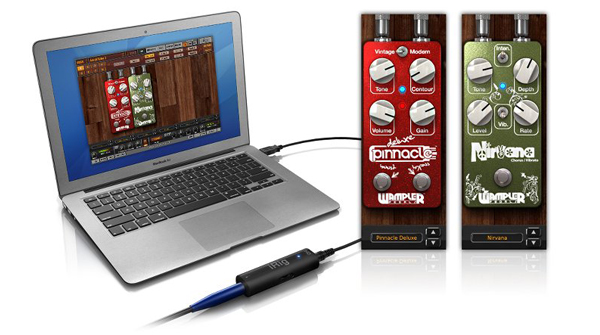 IK Multimedia along with Wampler Pedals announces the release of their top models in AmpliTube Custom Shop for Mac and PC. These new models give guitar players new high-end power tools to perfectly sculpt their tones in their DAW.

This pedal model is designed to reproduce the sound of late 70's to early 80's plexi-style amplifiers pushed to the limit. This classic tone, also known as Brown Sound was the trademark of several guitar-god innovators of that era. The Pinnacle Deluxe model offers the flexibility of a dual mode operation, where it can be used as a standard overdrive, or pushed further with the Boost switch, where an additional gain stage is added for increased distortion. Tone and Contour controls allow players to find the perfect balance of high end and mid-range, so that the pedal can be tailored to rhythm or lead sounds with an intuitive, easy to use design.

The Wampler Nirvana Chorus is one of the most versatile chorus models in the Custom Shop. It delivers both flexible, shimmering, lush, rich chorus effects and a huge range of vibrato all from one stomp effects pedal. It features a level control capable of boosting the effect signal above unity, a tone control for fine tuning and sculpting the high-end content tone of the effect, depth and rate controls, plus a tri-level effect intensity toggle and vibrato/chorus mode toggle.

The AmpliTube Custom Shop for Mac/PC is a free DAW plug-in and standalone app that gives players access to some of the most sought-after analogue and digital music gear. Once installed, it allows players to browse collections of gear models from the world's top manufacturers of gear including Fender®, Ampeg®, Orange®, Soldano®, Gallien-Krueger®, Dr. Z®, Jet City®, T-Rex®, Zvex® and more, plus signature gear from artists like Slash and Jimi Hendrix. Players can buy individual pieces of gear or entire collections using Custom Shop Gear Credits or currency.

With IK Multimedia's range of interfaces for mobile devices and Mac/PC, getting guitar signal to AmpliTube is as simple as plugging into an amplifier. iRig HD and iRig PRO are the newest digital interfaces that allow players to plug into an iPhone, iPad, iPod touch and a Mac or PC* and deliver pristine quality pure guitar signal.

To access the new gear models in the AmpliTube Custom Shop, users need to download AmpliTube version 3.13, which is also a free update for current AmpliTube owners, and is available for Mac/PC. The new models are available now and can be purchased with Custom Shop Gear Credits. Wampler Pinnacle Deluxe and Wampler Nirvana Chorus are available for 20 credits each. Gear Credit Packs start as low as $19.99/€15.99 (for 20 credits) and go up to $749.99/€639.99* (for 1,500 credits).