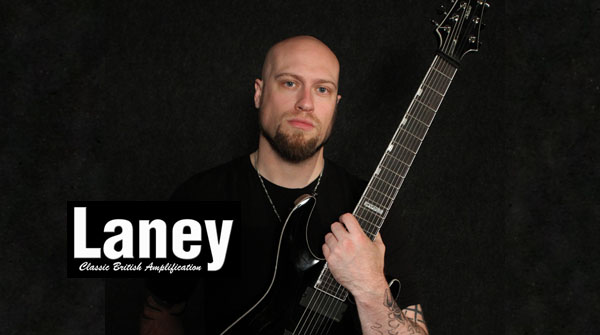 Laney has announced it's latest endorsee and it's none other than our own shred king Andy James. Andy is widely regarded as one the best metal guitar players in the world and now that he is teamed up with Laney amps, he is guaranteed to sound even better!

Laney has released this statement:

We are very happy to welcome Andy James to the Laney family of endorsees.

For some time, he has been widely regarded as one of the U.K's rising stars in the realms of Shred & Metal guitar. Now, Andy James has undeniably earned himself a place among the very best in the world.

As a major contributor to 'Lick Library' and 'Jamtracks Central' - Andy has specialised in teaching lead techniques for Heavy Rock and Metal. Not only can he be found mastering others' techniques but, influenced by the likes of Andy Timmons, John Petrucci, Paul Gilbert and Adam Dutkiewicz, Andy is incredibly skilled as a songwriter, as heard on a solo 'In the Wake of Chaos' and 'Machine' , as well as his contribution to his band, Sacred Mother Tongue, who have a new album about to be released.

It hasn't taken long for Andy James' name to become a leading light in the world of Metal guitar; Andy can be found holding workshops and master-classes as far afield as the Los Angeles N.A.M.M show and the Frankfurt Music Messe.

Be it workshops, exhibitions or with Sacred Mother Tongue, seeing this man live is a must. To witness first hand the sound, the dynamic, the dexterity and the speed with which he plays, live on stage, is a site to behold and is the personification of what has made Andy James world-renowned in his field, and now, the world is his fretboard.

Andy is heading out to China for some dates starting next week with Sacred Mother Tongue. He is currently using the Ironheart range of amplifiers.