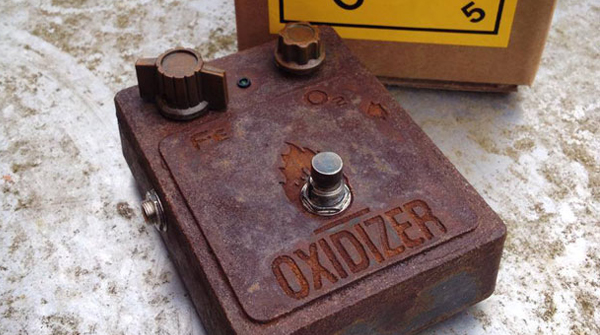 Hutchinson Guitar Concepts has announced the release of a limited run of its first ever overdrive pedal, 'The Oxidizer.'

With its heavily rusted finish and Fe (Iron/volume) and O2 (Oxidation/drive) controls, you know that it’s going to add some serious oxidation to the sound.

The Oxidizer creates overdrive tones going from tweed style to a heavier distorted tone. With its massive volume boost working in conjunction with your amps gain rather than instead of it, to hammer your amp and push it into overdrive without colouring the tone. The Oxidizer is responsive to pick attack and dynamics, and cleans up really well by rolling the guitar volume back. The pedal comes with an adapter but has a low drain on batteries. Get yours now as they are limited to a run of 20 pedals, which are each hand numbered.