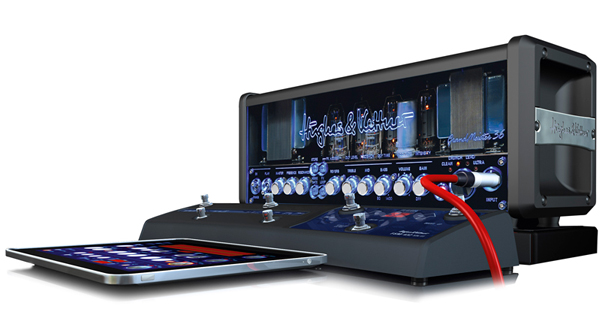 German amplification wizards Hughes & Kettner have unveiled the next step in the evolution of the guitar amplifier – the GrandMeister.

Available from mid-September 2013, the GrandMeister takes the winning Hughes & Kettner TubeMeister all-tube amp formula and brings it fully up to speed with modern technological advances – and a range of classic guitar tones.

The GrandMeister is an analog tube amp as we know it, but Hughes & Kettner have added studio quality effects and replaced all the conventional potentiometers with Smart Rotary Controls that make tube tone programmable. H&K Product Manager Rüdiger Forse says: “With Smart Rotary Controls, our developers have created a unique feature that opens a new chapter in controlling tube-driven tone. You can remote control every single pot and switch simply by MIDI. With any MIDI footswitch, expression pedal or even with an iPad. Imagine you can not only adjust volume with your pedal, but also gain or your EQ setting. On stage – in realtime! This a radically new way to express yourself.”

With GrandMeister, you still get all those TubeMeister features – including that all-important Red Box DI output and the cool blue lighting – but with the addition of reverb, tap delay, flange, phase, tremolo and chorus and full programmability of the four valve channels, effects and power soak.

The GrandMeister is available as a 36-watt head, with the power soak allowing you to switch to 18-watt, 5-watt, 1-watt and silent modes – perfect for performing anywhere between the world's biggest stages and recording silently at home during the night. Powered by four EL84 valves, the GrandMeister is capable of a jaw-dropping array of tones, from crisp cleans to crunching distortions and soaring overdrives.

The GrandMeister can be fully controlled by any MIDI controller, or via Hughes & Kettner's FSM432 MKII floorboard, with real time control thanks to an expression pedal and footswitch, and it is also to control and programme the amp via an iPad – the free GrandMeister app is already available in the App Store.

Even without the MIDI controller or iPad, though, the GrandMeister is fully functional thanks to its clever Smart Rotary Controls, which allow the amp to be free of legions of control knobs.

Hughes & Kettner is distributed exclusively in the UK and Eire by John Hornby Skewes & Co. Ltd. For more information, visit the JHS website.