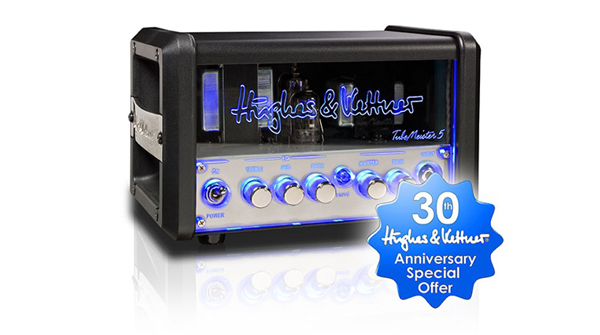 Guitarists have come to appreciate the world's smallest BIG amp as the perfect recording tool. Now, to mark Hughes & Kettner's 30th Anniversary, Meister fans can enjoy a special offer on the TubeMeister 5 Head and Tubemeister 5 Combo.

Hughes and Kettner have always been at the forefront of guitar amp innovation, building the worlds first fully programmable guitar amp the AS64 shortly after the company was founded in 1984, and they continue to push the boundaries of technology, whilst acknowledging that all-important tone.

Nothing personifies this more than the TubeMeister range and the TM5H head and TM5C combo  are single channel tone machines, with oversized transformers and a 12BH7 dual triode that operates in push-pull mode - giving the player unlimited tonal response and pure valve growl without getting the neighbours banging on the wall! In addition, the inclusion of the world renowned Red Box DI out and a built-in power soak that allows you to run at zero watts, these amplifiers are the ideal tool for recording genuine valve tone in either the studio or at home.

Find out more at : Hughes & Kettner