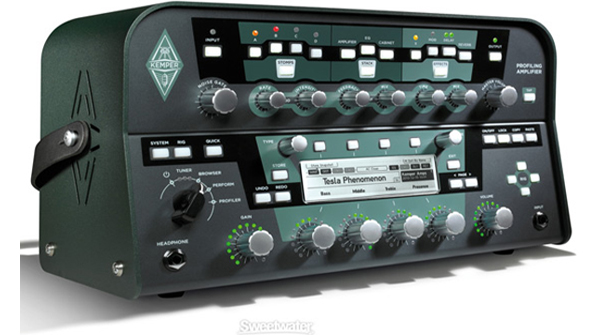 Kemper Amps has released the brand new Software Version 1.1 forthe Kemper Profiling Amplifier. This mandatory update includes aset of brand new Lo-Fi FX, and a collection of 50 additional AmpProfiles carefully collected from a range of guitar players withoutstanding amp set-ups. Since its release in December 2011, theKemper Profiling Amplifier has found its way into the recordingstudios and live rigs of internationally renowned producers andguitarists. The possibility to take the unique sound of your own,personal amp rig into any studio, as well as on tour, has opened upa whole new world of possibilities to guitarists.

Some examples: Steven Wilson toured South America with his"Grace For Drowning" project, and his fellow guitar Player, NikoTsonev, played the Kemper Profiling Amp through whatever amp wasprovided for him at the very diverse venues. He said he loved thesonic consistency, which can be heard on the Blu-ray/DVD availablelater in 2012. Legendary German Rock Act "Die Toten Hosen"(celebrating their 30th anniversary with a #1 album this year)played to a crowd of 80,000 at Rock am Ring, with 3 KemperProfiling Amps feeding the guitar and bass rigs. Producer AndySneap and guitarist Wolf Hoffmann used the "Profiler" on thesuccessful new ACCEPT Album "Stalingrad". Andy Sneap also did someextensive reamping with the KPA during the recording sessions forthe current Testament album. Steve Lukather has been spotted withthe Kemper Profiling Amplifier while talking about his upcomingsolo album, and Steve Morse has already integrated the Profilerinto his studio. The current Marilyn Manson record "Born Villain"features some Profiler tracks, guitar legend and acclaimed"texturalist", David Torn, plays and loves the Kemper, countrymusic megastars Tim McGraw and Kenny Chesney are both touringstadiums this summer, with guitarist Dennis Hemmingson playing theProfiler. There are several major tours and productions in thepipeline that we cannot talk about yet - keep your eyes peeled atwww.kemper-amps.com for details as soon as they becomeavailable!

The profiles were all done by the Kemper Profiler Team whichconsists of Manfred Franzkowiak, Markus Wienstroer and Soundengineer Dirk Baldringer. All the profiles were taken at DirkBaldringer's Studio 25, where they worked tirelessly to create thebest possible profiles with that "3D-like" feeling. The team isdelighted with the results and excited that these profiles are nowavailable to the public. Some of the highlights are:

Dead Vox AC 15 / the amp died during the session, we profiledthat very moment, sounds like the Fuzz you can't buy, very earlyZeppelin style.

Also some special Rigs by Bill Ruppert include:

The new Amp Profiles as well as the new FX set come free ofcharge with the Kemper Profiling Amp and can also be found in thedownload section on the webiste: www.kemper-amps.com

All new effects are available in the 'Stomps' as well as in the'Effects' section. Due to their non-linear character, the resultsof placing them pre-amp or post-amp can be significantlydifferent.

This effect reduces the sampling rate of the audio signalpassing through and results in a raspy, scratchy tone withaliasing. The 'Peak' parameter continuously controls the quality ofthe sample rate interpolation, which alters the harmonic contentdrastically.

The signal is modulated by a sine oscillator. Lower settingsproduce a tremolo-like effect, whereas higher settings bend thecomplete harmonic structure of the instrument into a bell-likecharacter by shifting every frequency component either upwards (sumfrequency) or downwards (difference frequency). The 'Stereo'parameter divides the sum and difference frequencies into the leftand right channel. The bipolar nature of the 'Manual' parameter cannow be used to reverse the stereo panorama.

The frequency shifter can be thought of as a 'deluxe' ringmodulator. Even today, only a handful of frequency shifters existin the digital domain. It is as useful for creating beautiful,subtle harmonic deviations as it is in producing high-pitched,clangourous noise. Like the ring modulator, it uses a sine wave tomodulate the signal, but in such a way as to produce only the 'sum'or 'difference' frequencies of the two signals. In contrast to apitch shifter, which preserves the dependencies of the harmonics,the frequency shifter bends these dependencies, resulting in abell-like spectrum. It's not unlike a shortwave radio that hasn'tbeen tuned correctly.

The Recti Shaper behaves like a physical rectifier, by foldingthe negative half-cycle into the positive portion of a wave. Theintensity of the effect is controlled by 'Drive'.

This effect is best known from octave fuzzes, which work bycombining a rectifier with distortion. The Recti Shaper providesjust the rectifier part combine it with other effects anddistortions as you see fit.

The Bit Shaper continuously reduces the bit depth of a signal,with higher 'Drive' settings resulting in fewer available bits. Theeffect can be described as introducing a fizzy distortion, with achoking of the signal at high settings. The signal can even breakoff completely at the most extreme settings.

These are distortion effects, with a unique character, thatprobably never existed in the analog realm. They are especiallydestructive when playing double-stops or chords.