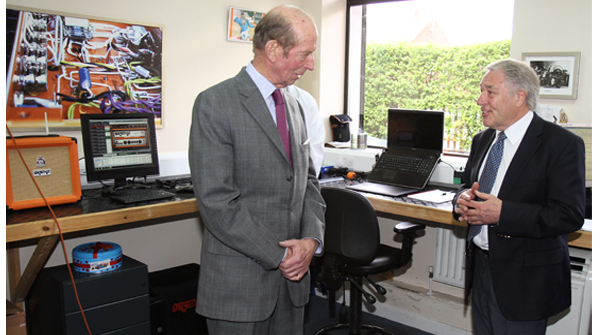 Orange Amplification were delighted to welcome HRH the Duke of Kent to their Borehamwood headquarters on 13th May 2014. The Duke’s visit was in recognition of the company winning the coveted Queen’s Award for Enterprise: International Trade, unprecedented in the Music Industry, three times in six years.

The Duke of Kent, accompanied by The Deputy Lieutenant of Hertfordshire, Stuart Nagler JP was given a warm welcome as he spent nearly an hour visiting the Hertfordshire based facility with its research and development department and talking with management and staff. Cliff Cooper, Orange CEO and Damon Waller, Managing Director escorted the Duke on his tour showing him where the cutting edge products, that have driven the remarkable expansion of the company over the last forty years, have been developed and made.

For many years the Duke was Vice–Chairman of British Trade International, and then became the United Kingdom's Special Representative for International Trade and Investment. Today he remains a patron of the Institute of Export and retains a great interest in enhancing the UK’s export performance.

Since receiving its first Queen’s Award in 2006, Orange Amplification has launched many new and innovative products, expanded into the computer market, and celebrated its 40th anniversary. Between its second award in 2009 and the third in 2012 the company grew their export sales by 90% and now sell Orange amps and other products into almost ninety countries worldwide.

Following one of the most exciting days at their HQ Cliff Cooper said:

“It has been a great honour to welcome HRH the Duke of Kent. Receiving three Queen’s Awards recognising our International Trade and performance how truly global the company has become has been made even more special by this royal visit. The Duke seemed to have a genuine interest in the success of our business in both UK and international markets and our contribution to the local and UK economy. Orange could not have done this without a highly dedicated team of staff throughout the world, they have made this possible and I would like to extend my heartfelt thanks to them all.”

Find out more at: Orange