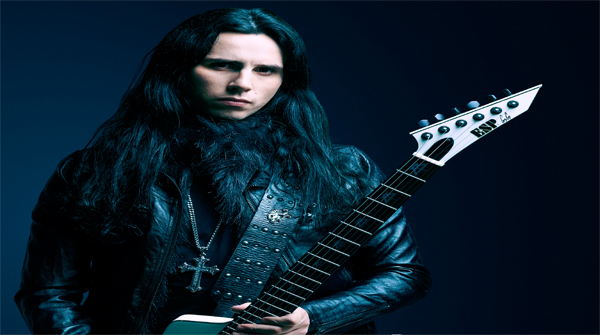 Gus G to Bring the Fire to The London Electric GuitarShow -

The London Electric Guitar Show isdelighted to announce that Ozzy Osbourne's six-string sidekick,Gus G, will be bringing his Greek melodicmetallers, Firewind, to London for a main-stagespot on Saturday November 10 2012.

A true phenomenon in the European metal scene, the Ozzy Osbourneguitarist will raise the roof at London's Olympia with his ESPCustom performing a full-band set with the internationallyrenowned, Firewind. This will be an exceptional performancespanning their fourteen-year career and seven studio albums. Afterforming in 1998, they are now signed with Century Media Records andare currently on a European tour promoting their latest album, FewAgainst Many. The addition of Gus G with Firewind completes themain stage line-up for Saturday November 10 at the London ElectricGuitar Show. Gus G has also appeared as the guitar player in ArchEnemy, Nightrage, Dream Evil and Mystic Prophecy.

The London Electric Guitar Show willalso provide intimate and informative masterclasses from JenniferBatten and Soren Andersen (Glenn Hughes, Joe Bonamassa), with moredue to be announced to take place over the weekend. Visitors canrevel in the huge selection of guitars and gear available to tryand buy in the exhibition hall, many with exclusive discounts andoffers only available at The London Electric Guitar Show.

Main stage performances and masterclasses are included in theentry ticket price, so there are no added costs.

Tickets are available from www.londonelectricguitarshow.comand also by calling 01926 339808.