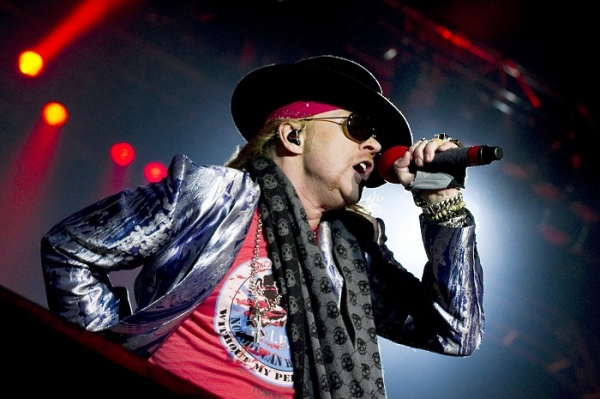 Guns N' Roses are set to take over Sin City this November with12-date residency at The Joint inside the Hard Rock Hotel &Casino, Las Vegas.

Guns N' Roses has teamed up with Hard Rock Hotel & Casinoto invade Las Vegas with a never-before-seen, one-of-a-kind musicexperience. Each night, the band will perform an electrifying showfeaturing a set list created exclusively for TheJoint. Appetite for Democracy will span the band'sbiggest hits from their debut album Appetite forDestruction(1987) through their platinum-sellingrecord Chinese Democracy (2008). Exact details about theshow are being kept under wraps but fans can expect the raw andgritty heavy metal Guns N' Roses is known for along with a fewsurprise elements. Produced exclusively by AEGLive, Appetite for Democracy is unlike any show the bandhas ever done before or will ever do again.

The history-making residency comes on the heelsof Appetite for Destruction's 25th anniversary. Thegroundbreaking record propelled Guns N' Roses into rock musichistory with songs including "Welcome to the Jungle," "Sweet ChildO' Mine," and "Paradise City." Named as one of the "500 GreatestAlbums of All Time" by Rolling Stone, Appetite forDestruction enjoyed one of the longest runs of any hard rockrecord, remaining on Billboard's "Hot 100" for nearlythree years. To date, the album has sold more than 18 millioncopies in the United States, with worldwide sales in excess of 30million.

"This past New Year's Eve, Guns N' Roses tore the roof off TheJoint with two sold-out shows. They were incredible; we watchedthem perform their timeless hits and soon-to-be legendary songsoff Chinese Democracy. Immediately following, AEG Live andHard Rock began turning our fantasy of having them as a residentartist into a reality," added Bobby Reynolds, vice president ofbooking at AEG Live, Las Vegas. "To hear one of the biggest bandsin the world rip through their catalog of hits is going to beamazing. There is no better way to celebrate the anniversary oftheir iconic album Appetite for Destruction than topresent Appetite for Democracy at The Joint.

Ticket prices start at $45 (plus applicable servicesfees) and go on sale to the public at 10 a.m. on Friday, Aug. 17.To purchase tickets or for more information, visit the Hard RockBox Office, all Ticketmaster locations, www.ticketmaster.com, www.thejointlasvegas.com orcharge-by-phone at 800.745.3000. Ticket and room packages areavailable atwww.hardrockhotel.com.