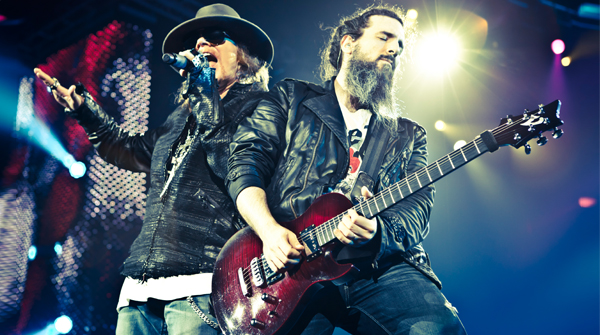 GNR's most recent studio offering 'ChineseDemocracy' took 14 years to record and was eventuallyreleased in 2008 after nearly a decade of Axl Rosepromising to release the record, even with the original line updissolving around him.

However Thal, who completes the new line up along with Rose,Richard Fortus, Dizzy Reed,Tommy Stinson, Chris Pitman,Frank Ferrer and DJ Ashba, isoptimistic there will be new material.

He told Rolling Stone (via Hennemusic),

"We're still doing shows, and I think once we clear ourschedule and focus more on new music, it'll happen. We just havelittle things on the back burner, just waiting for the right timefor us to organize and make something new out of it. Hopefully wecan make more music - that's what it's about."

"It's what the fans want, too. They want new music, and wecan do it. It's not that we're done. I'm not ready for that. Weneed to keep making music. We have a great band that's ready to doit and can do it well."

"Let's keep our fingers crossed that life will not get in theway and we can get this last batch of shows done. Looking forwardto it, but I'm also looking forward to having the main priority ofour Guns time be making new music."