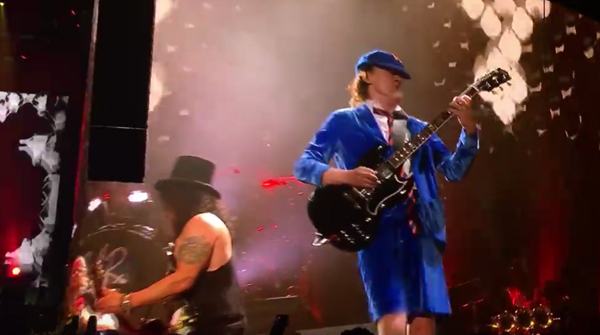 AC/DC icon Angus Young made a guest appearance during Guns N' Roses Coachella performance this past Saturday just hours after it was announced that Axl Rose would be joining the Australian hard rock outfit for their European tour.

To introduce Young, Rose announced, "Since I can't run around for you, we're gonna bring out a friend, put a little life into things for us," before Angus appeared before the southern California crowd.

Back in 2015, Young and AC/DC headlined the 2015 Coachella festival prior to the start of their Rock or Bust Tour, which was postponed in March after Brian Johnson revealed that doctors recommended he quit touring or risk "total hearing loss."

Rose will now join AC/DC when they resume their Rock or Bust tour next month. You can check out their upcoming European tour dates below.