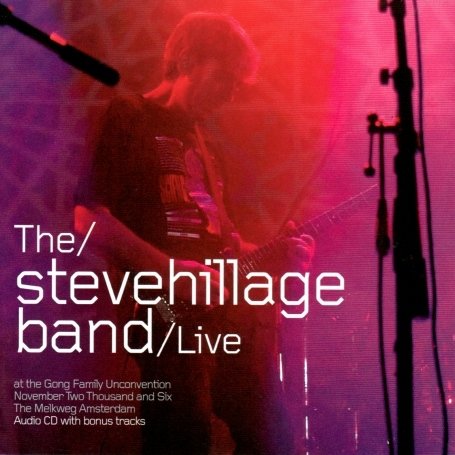 The first live performance of The Steve Hillage Band in 25years!

The Gong Family Unconvention at theMelkweg club in Amsterdam in November 2006 was a unique 3 day eventin which all the original members of the legendary psychedelic bandGong came together and performed their own individual sets. Guitarlegend Steve Hillage, who was a prominent part of the "classic"Gong line-up of 1973-75 felt it was a great opportunity performagain some of the songs from his 1970s solo albums. Steve Hillageis widely considered a guitar innovator, and is associated with theCanterbury scene, working in experimental domains since the late1960s. Besides his critically acclaimed solo recordings, along withGong, Steve has been a member of the ensembles Khan and System7.

Steve's live set at the Gong Family Unconvention in 2006provoked a rush of excitement and emotion at the event, and thiswas beautifully captured on film and recording - and is nowavailable on this DVD and CD.

Performing with Steve were his long-time musical partnerMiquette Giraudy on synthesisers, Gong bass player Mike Howlett whoplayed on Steve's 'Fish Rising' album from 1975, and Gong drummerChris Taylor who started playing with the band in the 1990s. Alsoguesting was Basil Brooks on synthesiser, who played in Steve'sband in the '70s.

Tracks played were as follows:

3. Aftaglid (from the album 'Fish Rising')

6. These Uncharted Lands (from the album 'For To Next' and neverbefore played live)

Tracks recorded live at Amsterdam's Sonesta Koepelkerk on Dec14th 1979 just a few days before the the 1970's Steve Hillage Bandstopped touring are:

And finally an interesting early version of one of Steve's 'FishRising' classics performed before it was recorded with the bandGong:

The DVD has bonus material in the form of a substantialinterview with Steve and Miquette, and background clips from aroundthe Gong Melkweg event.

The audio for the CD and DVD was mixed by Steve in his A-WaveStudio and has a rich, warm sound. The video DVD was edited andauthored by long time friend and Gong family member HarryWilliamson in his Spring Studio in Melbourne Australia.

The artwork was put together by Z3 who do the artwork for Steveand Miquette's dance music project System 7.

If indeed Steve does create some more music in the psychedelicrock sphere this powerful and unique live recording can be seen asa launch pad. Steve currently sees his System 7, Mirror System, andSteve Hillage Band entities as operating in parallel and has beenwriting some new rock-based material for a possible Steve HillageBand album for release in 2013/14.

To pre-order Steve Hillage - 'Live in Amsterdam 2006 at the GongFamily Unconvention' CD & DVD:http://www.planetgong.co.uk