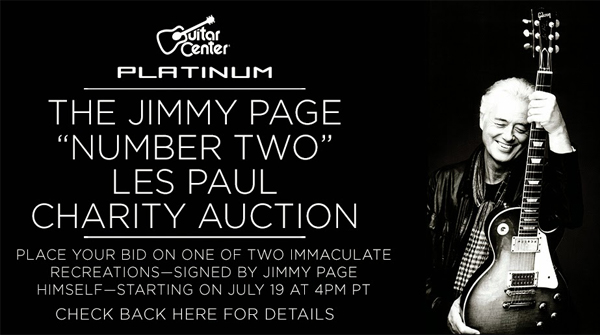 The guitar's history is nearly as storied as Page's musical career, obtained in 1970 the guitar has been a fixture of Page's sound ever since. The electronics were altered to achieve the widest possible range of sound and tone from two humbucker pickups.

However, four years ago Gibson Custom recreated "Number Two" and made them available in an extremely limited run. The new models were built to Page's exact specifications, replicating the iconic aged flame maple top, faded "Page Burst 2" finish, and even the dings, dents and wear marks.

Just 25 guitars were released worldwide, and all 25 of them were individually played, signed and numbered by Page. Jimmy kept #1 for himself and the remaining 24 guitars instantly became highly valued collector's items.

Now, after half a decade, Guitar Center is opening the vault and offering #2 and #5 as part of this special online charity auction.

The minimum bid is $20,000 for each guitar, and each comes with a certificate of authenticity.