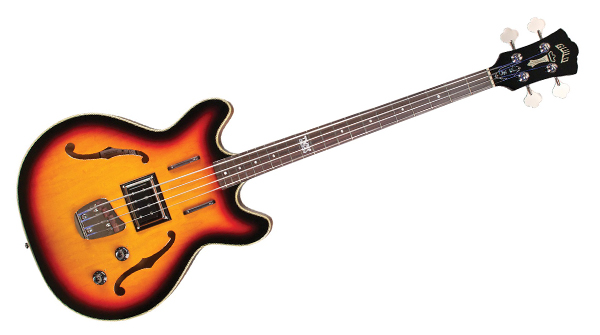 (PRESS RELEASE): Guild Guitars is proud to announce the release of the Chris Hillman Signature Byrds Bass, a tribute to the Byrds’ breakthrough success in the mid-1960s. Faithful to the original Guild Starfire Bass used by Hillman on recordings like “Turn, Turn, Turn,” “Eight Miles High”, and “The Times They Are A-Changing,” this new “Byrds Bass” features a semi-hollow allmaple body, rosewood fingerboard, three piece mahogany neck, and single BS-1 BiSonic pickup. “I didn’t think you needed two pickups for what I did, [and] I never thought you needed more than four strings,” Hillman said during a recent visit to Guild’s new California headquarters. The Guild Starfire was Hillman’s go-to bass for much of the mid-1960s due to its “ease of playing,” he said.

Chris Middaugh, a former associate at Guild, had begun the initial concept of the reissue as a Guild Starfire I Bass, but the project changed course with the involvement of two key players in Hillman’s circle. Tracy Longo, longtime luthier to Hillman, assisted as a liaison to the factory. John Jorgenson, a former bandmate and frequent collaborator of Hillman’s, was integral to the engineering and refinement of the instrument's custom tone circuit.

Another feature that was integral to Hillman’s sound was the use of flatwound strings, which were the industry standard at the time, and remain Hillman’s preferred choice for their mellow, smooth tone. The Byrds Bass features the Byrds’ logo inlaid in the 12th fret, Hillman’s signature on the truss rod cover, and a vintage sunburst finish that matches his original. Every bass includes a hardshell case, and a numbered certificate of authenticity personally signed by Chris Hillman. “I loved playing the stuff we did in the Byrds,” Hillman said. “It was a good band. I was lucky to be in it.”

For more infomation on Guild Guitars