Godin Guitars Receives 'Manufacturer of the Year' Award at 2 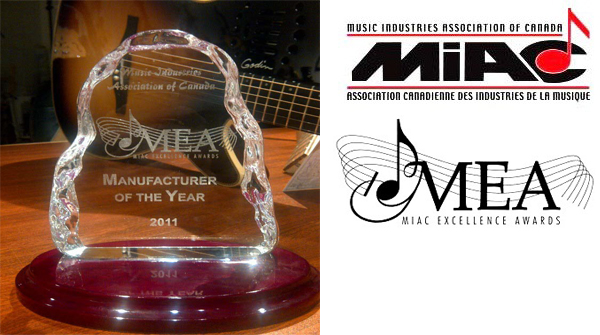 Montreal based Godin Guitars was awarded the honour of "Manufacturer of the Year "during the 2nd annual MIAC Excellence Awards on Sunday May 13th at Toronto's International Centre. The M.E.A.s were presented during a special ceremony at the 41st annual MIAC trade show, which is Canada's premier trade show for the Canadian music products industry.

The MIAC Excellence Awards are presented to those individuals and organizations that exceptionally contributed to the well-being and future prosperity of the industry as a whole.

Robert Godin, founder of Godin Guitars, was on hand to pick up his manufacturer of the year honour, as was Godin's Sales & Marketing Manager, Mario Biferali who says; "We're very honoured for this recognition, and extremely proud of the fact that we make every single guitar right here in Canada. It is always nice to be recognized and this year being our 40th year in business, makes it that much more special."

With its early beginnings in 1972, the Godin Guitar family now includes 7 lines of guitars. These include the renowned Godin & Richmond electric lines, as well as the finely crafted acoustic lines such as Seagull, Simon & Patrick, Norman, Art & Lutherie and LaPatrie nylon stringed classical guitars. Godin Guitars is also the manufacturer of the revolutionary TRIC acoustic guitar case and is the North American distributor of high-end Italian made SR Technology acoustic amplifiers. Based in Montreal Quebec, this Canadian company has 6 factories, 5 of which are located in the Eastern Townships of Quebec and 1 located in Berlin New Hampshire.