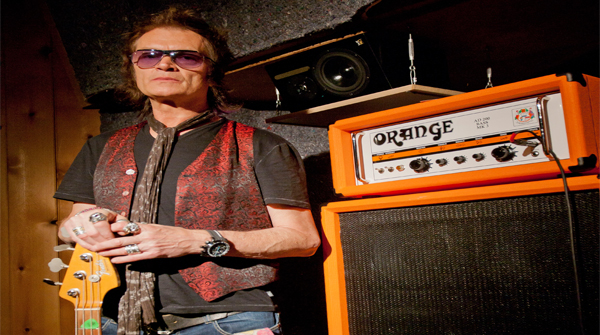 Orange Amplificationhas announced that legendary bassist Glenn Hughesis now endorsing their amps. For over forty years Glenn has been avocalist, bass player and songwriter in some of the greatest rockacts of all time as well as achieving success in his own solocareer.

From his early days with Trapeze, the Britishrock bassist and vocalist went onto to join one of the biggestbands of the '70's, Deep Purple where Glenn's bassplaying and vocals were the anchor for several classic albumsincluding Burn, Stormbringer and Come TasteThe Band. He is currently lead vocalist and bass player in therock supergroup Black Country Communion and stillfinds time to record and tour in his own name as well as many otherprojects such as The Rock & Roll AllStars.

His move to Orange sees him returning back to his roots of usinga British made vintage inspired amp with full modern tones.Commenting on Orange Amplification, Glenn said:

Glenn will be using the AD200B MK3 Head with an OBC810 8 x 10"Bass Speaker Cabinet on his latest tour. The AD200B MK3 is quitesimply one of the purest bass amps ever produced with a creamydynamic low end and a focused midrange crunch. The OBC810 is arevered Bass Cabinet first made in small numbers back in the 1970s,and recently re-launched, it has to be heard to be believed.