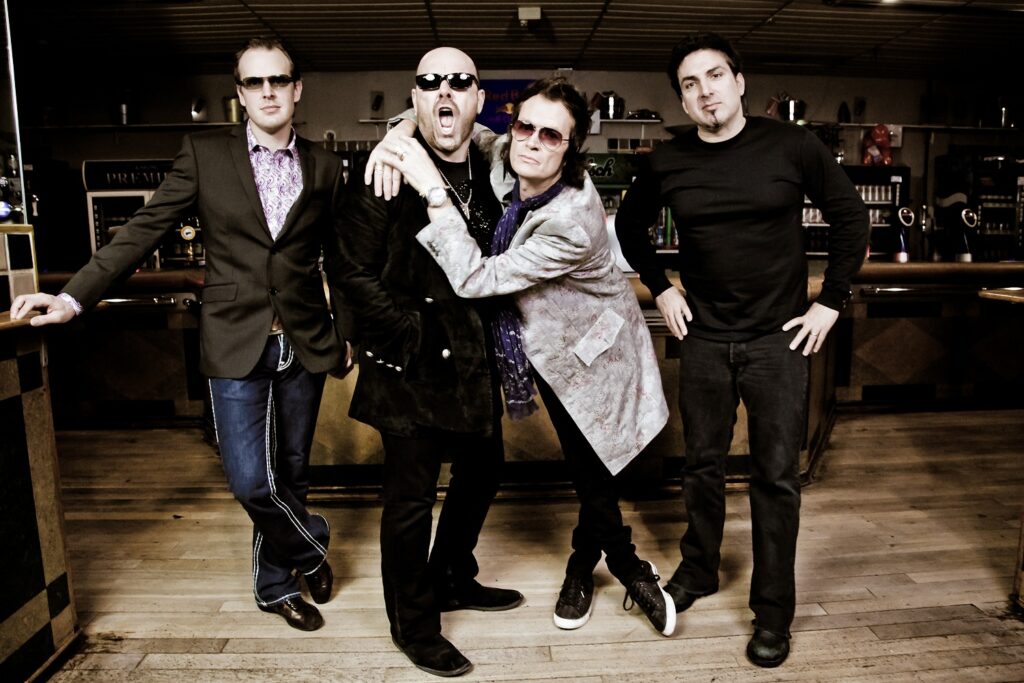 Black Country Communion's 3rd album 'Afterglow' will be releasedOctober 30th and vocalist/bassist Glenn Hughes has spoken about thealbum and offered an insight into each of the 11 tracks.

The tracklisting for the album is:

'Big Train': "It's very quirky and British-sounding. JasonBonham is an incredible timekeeper. I love the way he provides theengine room on that song."

'This Is Your Time': "Let's give Jason Bonham a little morelove. He writes his songs on an iPhone whilst driving his car,which is completely nuts. It really helps the groove factor. Heemailed me some footage of him playing this song. He wrote themusic and I wrote the lyrics. It has a huge chorus, too. Jason isnot just a brilliant drummer - he's a great songwriter."

'Midnight Sun': "I had my wallet stolen in a Starbucks andarrived late at the studio. When I got there the guys were foolingaround with a song that sounds quite a lot like The Who, thanks tothose Rabbit Bundrick-style keyboards. I picked up my bass andjoined in. It's quite a romp; there's a definite vibe of Moon andEntwistle."

'Confessor': "The first album had 'No Time', which was slow andgroovy. I wrote 'Confessor' that way too, but when Jason heard ithe insisted upon playing it - in his own words - like his dad wouldhave done. We're a democratic band and I went along with that. Whenhe turbo-d it up it really came to life."

'Cry Freedom': "I sang this one alone originally until Kevinpointed out that the album didn't have a song with split vocals.Joe and I sing well together. I've never had a problem sharing amicrophone with other great singers. We really let rip off oneanother on this one, which has a ZZ TOP/HUMBLE PIE kind of avibe."

'Afterglow': "[At more than six minutes long] it's an epic song.I was adamant that this album should have a proper title instead ofa number. I played it to the band right at the end of sessions -purposely so. When they heard it on acoustic guitar, everybodyagreed that it should name the album."

'Dandelion': "I wrote it slower than we recorded it; maybe I hadtoo much coffee that day. Had we done it that way then maybe itwould have sounded a bit dirge-like. Jason sets the tempos - he'sgot a really good ear for the way that a song should sound."

'The Circle': "It's one of my favourites on this record. Itgives me the chance to use my 'breathier' voice. Kevin asked me tosing it an octave higher than I intended, and it worked. The highvoice in the chorus is not my falsetto, it's my upper registernatural voice. I'm singing about being powerless; being in adreamlike state. People have spoken about my voice and bass playingfor so many years, I hope that this time they notice my lyricsbecause I'm very proud of them."

'Common Man': "That's another of the songs that came from Jason.When he sang me its melody acapella I could hear myself singing it.It could have been a song from Deep Purple's 'Stormbringer' album;he wrote it for my voice."

'The Giver': "When you listen to the end of the song, if peopleare trying to figure out what key it's in, I'm playing a capo [adevice that raises the pitch of notes] on the fifth fret. When Iwrote it, I deliberately held back from completing it because itneeded Joe's input. Kevin helped as well."

'Crawl': "Some people may know that this song was going to be on'BCC2' but we held it over because there simply wasn't enough room.To me, it fits this album a lot better. It's a really aggressivesong - it's dangerous and angry. I love it. It's a great way tofinish the record."