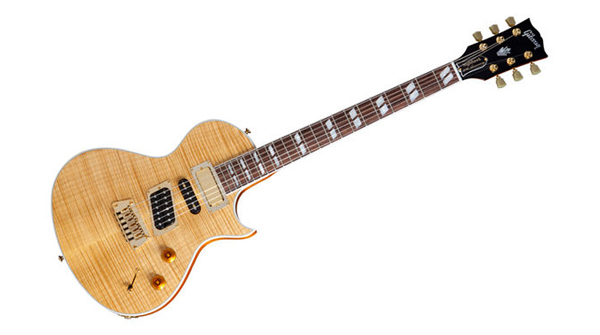 A modern classic comes of age as Gibson celebrate twodecades of the three-pickup electric with the release of the20th Anniversary Nighthawk Standard.

Unveiled to the guitar world in 1993, the Nighthawk hasestablished itself as a "modern classic" in the Gibson stable overthe course of 20 years of powerful, versatile performance, whilewinning legions of fans in the process. To celebrate this highlyevolved marriage of Gibson innovation and tradition, Gibson USAintroduces the 20th Anniversary Nighthawk Standard. This guitar ispacked with the clever design features that made the instrumentsuch a winner originally, and dressed worthy of a trueshowpiece-making it a guitar you will be proud to own and play fora lifetime.

The 20th Anniversary Nighthawk Standard retains all thedistinctive ingredients that make this unique breed of Gibson sospecial, including the 25 ½" scale length for firm lows and chiminghighs, the comfortable body contours, through-body stringing andunique Nighthawk bridge, and the superb versatility of a trio ofdifferent yet complementary pickups, with push-pull coil splittingfor the bridge pickup. A high-gloss nitrocellulose finish in yourchoice of Antique Natural or Fireburst over a gorgeous figuredGrade-AAA maple top, deluxe split parallelogram fingerboard inlays,gold-hardware, and a truss-rod cover hot-stamped in gold with"Nighthawk 20th Anniversary" all make this an extra specialaddition to the proud line.

The 20th Anniversary Nighthawk Standard's body follows theNighthawk's stylized take on Gibson's legendary Les Paul, with ascaled-down body with deeper cutaway, and ribcage contour forenhanced playing comfort. Its top is made from figured Grade-AAAmaple, and its back is solid mahogany. A solid, quarter-sawnmahogany neck with a 25 ½" scale length is glued into the body andcarved in a comfortably rounded profile that measures 0.818" at the1st fret and 0.963" at the 12th. The guitar has a bound fingerboardmade from solid Grade-A rosewood, inlaid with split parallelogramposition markers. A Corian™ nut cut on Gibson's computer-controlledPLEK helps to ensure optimum sustain and precise intonation.

Much of the 20th Anniversary Nighthawk Standard's unparalleledversatility is found in its trio of different yet complementarypickups. The Nighthawk Mini-Humbucker in the neck position offers arich, throaty growl, but with plenty of definition; an NSXNighthawk Single-Coil in the middle offers both snappy funk tonesand thumping midrange; and the Nighthawk Lead Humbucker in thebridge position yields tones from mammoth crunch to articulate,singing lead sounds. Just pop up the tone control's push-pullswitch to tap brighter single-coil sounds, and blend myriadcombinations of these with the five-way switch. Master tone andvolume controls make on-the-fly adjustments a breeze.

Through-body stringing and a rock-solid Nighthawk bridge lendsuperb resonance and massive sustain to this high-concept guitar.The bridge, strap buttons, and vintage-style "Gibson Deluxe" tunersare all gold-plated, as are the pickup's mounting rings and theneck pickup cover. Amber "top-hat" knobs lend an air of Gibsontradition, and the guitar wears no pickguard to obscure the beautyof its highly figured top.