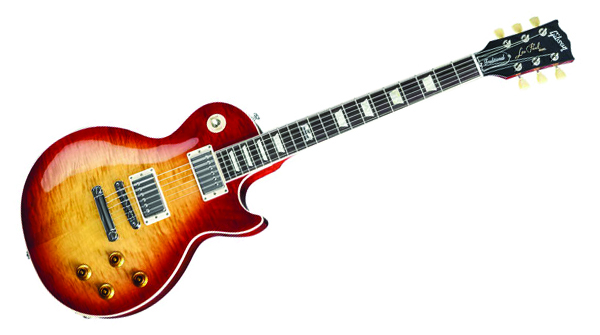 (PRESS RELEASE): One of a handful of guitars joining Gibson USA’s Limited Run 120th Anniversary Celebrations, the Les Paul Traditional Flame Top makes for a timely reminder of what makes the world’s most influential electric guitar such a long-running success. Combining classic tonewoods with vintage-spec pickups and top-notch hardware, this gorgeous guitar adds your choice of three grades of flame maple top—Level 3 (AA), Level 2 (AAA), Level 1 (AAA+)—made even more luscious beneath a high-gloss Heritage Cherry finish, to recreate the look of the most desirable Les Pauls ever produced.

The Les Paul Traditional 120 Flame Top begins with a non-weight relieved Grade-A mahogany body and a gorgeous flame maple top. This echoes the beauty of the highly desirable tradition of Les Pauls through the years, a vibe that’s carried through with a slim, fast neck profile on its Grade-A mahogany neck. A one-piece Grade-A rosewood fingerboard with frets over binding carries traditional trapezoid inlays, and there’s a commemorative “120th Anniversary” banner at the 12th fret. Vintage tones follow classic looks, thanks to a pair of 1959 Tribute humbuckers. Made with Alnico II magnets, 42 AWG enamel-coated wire, and slightly mismatched coils just like the original PAFs, these pickups capture all the depth and edge of the best humbuckers made from 1957-’60. Finish it off with quality TonePros™ Kluson® tuners, a Tune-o-matic bridge and stopbar tailpiece and cradle it in a brown hardshell case and you’re good to go!