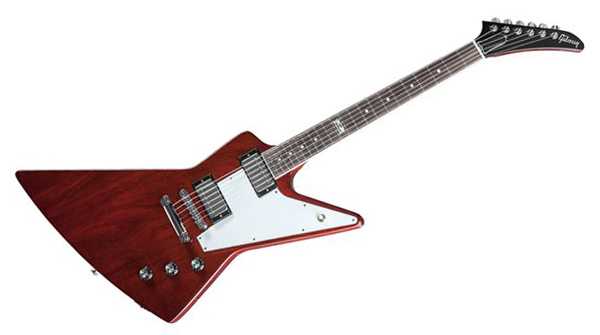 (PRESS RELEASE): Gibson has always been about blending innovation and tradition, so there’s no better addition to the 120th Anniversary celebrations than this creative re-think of the radical Explorer. Combining time-tested tonewoods, versatile pickups, and the full measure of Gibson USA craftsmanship with one of the most revolutionary guitar designs ever to hit the scene, the Explorer 120 delivers show stopping looks, superb playability, and versatile tones to take you center stage in a surprisingly wide variety of musical styles.

The Explorer 120 begins with a Grade-A mahogany body cut to the angular profile of this trend-setting axe. The glued-in Grade-A neck is carved to the fast, slim profile that so many rockers love, with a bound one-piece Grade-A rosewood fingerboard with frets over binding and dot inlays. The traditional “angled” six-a-side headstock has a mother-of-pearl Gibson logo, and there’s a commemorative “120th Anniversary” banner at the 12th fret. Vintage tones with contemporary performance come from Burstbucker Pro Rhythm and Lead pickups, made in the image of the original PAF humbuckers with mismatched coils for characteristic bite and depth. A chrome Tune-o-matic bridge and stopbar tailpiece partner with Mini Grover™ tuners for solid sustain and efficient tune ups. The Explorer 120 comes protected in an elegant brown hardshell case, in Heritage Cherry finished with hand-sprayed high-gloss nitrocellulose lacquer.