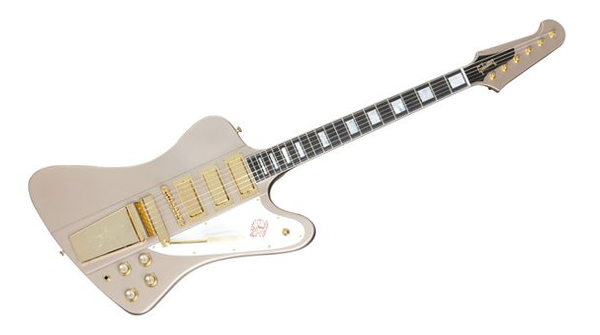 A 20th Anniversary 1965 Firebird VII Reissue has been announcedby Gibson to commemorate 20 years of the iconic model design.

Available as a limited run of just 100 guitars, the Firebirdalso ships with a pair of white gloves so that owners can handlethe guitar, albeit whilst its not being played, without damagingthe. However with a price tag of $9411 (approximately £6245), youcan see why Gibson felt the need for the extra protection.

The "reverse bodied" Firebird VII was a revolutionary designwhen it first left Kalamazoo 50 years ago, and has remained aboutas "custom" as it gets in the years since. This special 20thAnniversary 1965 Firebird VII Reissue captures all the radicaldesign elements and key features of this groundbreaking instrumentin a guitar whose looks befit its status, with a stunning GoldenMist Poly finish in nitrocellulose lacquer, gold hardware, a 20thAnniversary medallion covering the rear control access cover, acustom-fitted dust cover with retro 1993 Gibson Custom logo, and aone-of-a-kind, hand-made, framed Certificate of Authenticity. It'ssuch a stunning collector's piece we're even including a pair ofwhite gloves for careful handling. Only 100 will be availableworldwide.

Period-correct features on the 20th Anniversary 1965 FirebirdVII Reissue include the labor-intensive nine-ply mahogany andwalnut "neck-through" design, solid mahogany body wings, threeMini-Humbuckers, banjo tuners on a stylish reversed-six-in-lineheadstock, nylon 6/6 nut, Maestro vibrato, a three-ply whitepickguard with Firebird emblem, and of course the accurate"reverse-body" styling conceived by legendary Duesenberg cardesigner Ray Dietrich. In addition, the 20th Anniversary 1965Firebird VII Reissue will be among the last Gibson guitars to bemade with an ebony fingerboard. All in all, it's a gorgeous tributeto the world's best-respected Custom house.

Like the original 1965 Firebird, the 20th Anniversary FirebirdVII Reissue is based on the complicated "neck-through" design thatincludes a multi-ply mahogany and walnut neck and body-centersection with solid mahogany wings, all resulting in superbresonance and sustain. The iconic "reverse-bodied" styling wasnamed for its approximation of a more conventional offsetdouble-cutaway guitar flipped front to back. The neck is carved ina period-correct Firebird profile, and measures 0.830" at the 1stfret and 0.980" at the 12th. A genuine ebony fingerboard carries 22medium-jumbo frets and traditional pearl block inlays, and istopped with a nylon 6/6 nut cut on Gibson Custom's PLEK.

The 20th Anniversary 1965 Firebird VII Reissue comes equippedwith an ABR-1 Tune-o-matic bridge, a Maestro vibrola with longcover, and a set of period-correct banjo tuners, which wereoriginally included in the design to avoid spoiling the radicalprofile of the Firebird headstock. All hardware is gold-plated. Theguitar features a period-correct black truss-rod cover with goldGibson logo, gold Top Hat knobs with gold inserts, and three-plywhite pickguard with red Firebird graphic.