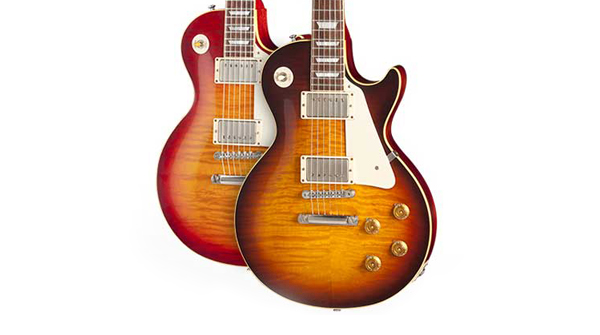 Paying tribute to the Les Paul's most sought after vintage year,these guitars are limited to only 100 of each finish, and while theMSRP of $9,174 (approx. £5,858) price tag may seem expensive, don'texpect these guitars to stay on the walls of showrooms toolong.

This is taken from Gibson's press release:

Devoted fans of late 50s Les Pauls understand thesubtle ways in which these guitars' woods, carves and finishes canvary, and love them all the more for their fascinatingdifferences.

The '59 Les Paul Factory Burst from Gibson Custom captures theessence of a few of the Custom Shop's favourite examples oforiginal '59 Bursts, recreated in loving detail and presented intwo exclusive VOS finishes, in a strictly limited run of 200guitars (100 per finish).

Each finish type carries its own set of accuratePAF-reproduction humbucking pickups, along with traditionalhardware and VOS appointments for a period-correct look and feel.The '59 Les Paul Factory Burst is sure to be a hit with players andcollectors alike, and is available on a first come, first servedbasis, so reserve yours at your authorised Gibson dealer today.

The first things you're likely to notice about the '59 Les PaulFactory Burst are the stunning woods and authentic finish andcolouring. As with any great and vintage-correct Les Paul, the '59Les Paul Factory Burst has the legendary mahogany/maple tonewoodcombination at its core. In this case, a weight-selected,unchambered, one-piece mahogany back is married to a hand-selected,premium-figured maple top, to capture the look of the mostdesirable Les Pauls ever built, as well as the tone that made theseguitars legendary in the first place.

The top carves on '50s Les Pauls could vary considerably, so tomatch the carved arch on one of the factory's favourite original'59s, Gibson Custom gives the '59 Les Paul Factory Burst a special"flat" dish carve, which is shallower than that of many otherexamples. A quarter-sawn, one-piece mahogany neck is glued in witha long tenon and topped with a rosewood fingerboard withtraditional nitrocellulose trapezoid inlays and a nylon 6/6nut.

Both sets of pickups are made to the specs of legendary originalPAF humbuckers, with genuine Alnico magnets and coils wound from42-AWG wire. As a result, they present all the rich warmth andsparkling harmonics of great vintage humbuckers, with thatcharacteristically soft, yet cutting, bite of original PAFs.

In short, the '59 Les Paul Factory Burst is the finestrecreation available of a rare and unique original, and each of thestrictly limited 200 guitars represents the unique beauty of theBurst in all its glory.