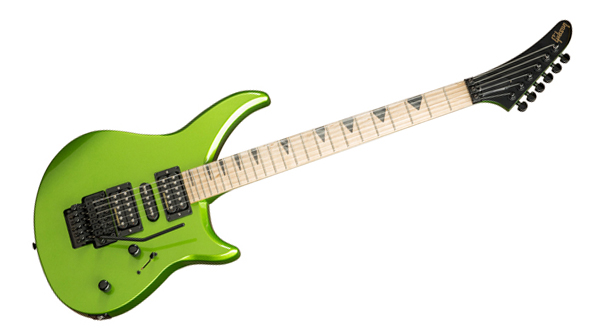 When Gibson introduced the M-III in 1991 it totally embodied the "shred" guitar, marrying Gibson's thundering power that had already ruled the rock world for more nearly four decades with the scale length, speed, and ultra-pointy styling that appealed to the world's fastest players. The new M-III from Gibson USA captures the magic of the original guitar's playability, power, and visual appeal, thanks to Gibson's renowned and exacting standards of workmanship and finish.

Just like the first M-IIIs, the new M-III starts from a foundation of Gibson tradition—seen it its solid mahogany body, glued-in neck, and high-gain Dirty Fingers™ humbucking pickups with versatile switching—and catapults it into the future with a major dose of style and innovation. The 25 ½" scale length enables piano-like lows and shimmering highs, while a Floyd Rose™ trem facilitates everything from radical dive-bombing to evocative vibrato, all with unparalleled tuning stability. To top it off, the neck's fast profile, super action, and easy access right to the top of the 24-fret fingerboard help the M-III offer a playing experienced equaled by none.

The M-III's scorching looks match its incendiary performance. The natural maple fingerboard with striking arrow-head inlays provides an eye-catching contrast to the explosive range of finishes on the guitar—from your choice of Cosmic Cobalt, Electric lime, Vibrant Red, or Orange Glow—all in high-gloss nitrocellulose lacquer. The all-black hardware complements the stunning visuals, and reminds you that the M-III is here to rock. Feel the heat at your authorized Gibson USA dealer, and crank out the shred like never before.

The M-III is built from a foundation of tonewoods that represent a marriage of Gibson tradition and innovation. A solid mahogany body presents the depth, richness and resonance for which that timber has long been famous, while a glued-in maple neck adds clarity and "snap" to the tone. The Grade-A maple fingerboard has a 25 ½" scale length, a compound radius for easy chording and smooth bending, and 24 jumbo frets, all within easy reach thanks to the M-III's radical asymmetrical, double-pointed body styling. Finally, a fast, slim profile and contrasting black arrowhead inlays declare the M-III a total shred machine. The guitar's body and neck are finished in high-gloss nitrocellulose lacquer in your choice of Cosmic Cobalt, Electric lime, Vibrant Red, or Orange Glow, while the fingerboard has a natural finish.

Gibson USA packs the M-III with a trio of its most powerful pickups, including Dirty Fingers+™ humbuckers in the neck and bridge position, and a Dirty Fingers+™ single coil in the middle. A five-way switch, combined with push-pull switching on the master tone control for humbucker coil-splitting, take you everywhere from warm, vocal neck pickup tones, to roaring crunch and soaring leads in the bridge, to bright, shimmering single-coil tones—all with unprecedented power and sustain.

A high-quality Floyd Rose™ vibrato with locking nut adds further versatility to your playing arsenal, while a set of genuine Grover™ Mini-Kidney tuners enhance the already unparalleled tuning stability. All hardware is black-plated, and the control knobs are easy-grip knurled black metal. The M-III carries a traditional black bell-shaped truss-rod cover, and wears no pickguard to obscure its dramatic range of finish options.