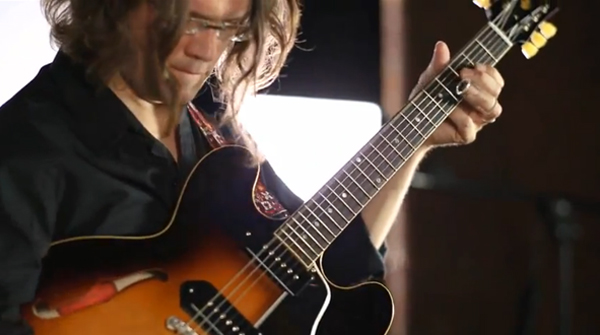 Here are the details which have been taken from the official Gibson website:

Steeped in the authentic blues of North Mississippi Hill Country originals like R.L. Burnside, Junior Kimbrough and Otha Turner, Luther Dickinson and his North Mississippi Allstars made a major impact on the music world when they hit the scene in the late 1990s. His searing tone and dynamic playing style have become instantly recognizable, and Dickinson has lent his formidable chops to class acts like Beck, the Replacements and Mojo Nixon.

The Luther Dickinson ES-335 packs Dickinson's own heady blend of innovation and tradition into a fresh-yet timeless-guitar whose surprising versatility fits multiple genres of music like a glove.

The Luther Dickinson ES-335 is built in the image of the renowned late-'50s ES-335, with a semi-hollow body for depth and resonance and a solid maple center block to aid sustain and combat feedback. Rather than the ES-335's humbucking pickups, however, it carries a pair of Dickinson's beloved P-90 single-coil pickups with "dog-ear" covers, for a distinctively biting, punchy tone. "I fell in love with the ES-330," says Dickinson, "so what I wanted to do was combine the two. If we can get the P-90 sound and response of a 330 on a 335 semi-hollow that can handle the rock and roll environment-now we're really getting somewhere. And then the cherry on the top… we put the Bigsby on there."

To top it all off, Luther wanted the guitar's finish to match the finish on a vintage ES-175 owned by his father, Memphis musician and producer Jim Dickinson, so Gibson Memphis pulled out all the stops. The deep, rich, vintage-toned "Jim Dickinson Burst" drips with tradition, and looks and feels gently aged right out of the case, thanks to Gibson's proprietary VOS process.

As a member of Boston hit-makers The Cars, and a consummate musician in his own right, Elliot Easton has consistently bridged the gap between chart success and innovative, alternative guitar playing. From early Cars singles like "Just What I Needed" and "My Best Friend's Girl," to 1981's "Shake It Up" (the band's first Top 10 hit), Elliot's creative, often quirky and frenetic riffs provided the propulsion to a driving and energetic sound-and in the process, Easton became a massively influential artist.

An enduring fan of Gibson electrics, Elliot has long been associated with a Signature SG. Now the artist and Gibson USA team up for a more alternative Signature model blending classic features with several player-approved advances: the Elliot Easton "Tikibird" Firebird, available in both left- and right-handed models.

Resplendent in an exclusive new Gold Mist Poly finish in high-gloss nitrocellulose lacquer, the Elliot Easton "Tikibird" Firebird boasts a stunning look in the classic and ever-radical "reverse body" Firebird design, augmented by its hot-stamped Tiki graphic on a traditional multi-ply white plastic pickguard and Elliot Easton's signature on the headstock's back. It's powered by a pair of Gibson's most popular humbucking pickups with versatile coil-splitting and phase-reverse wiring for unprecedented sonic variety. A Bigsby™ vibrato tailpiece with Vibramate™ Spoiler® for easy string loading gives you emotive dips and tremulous wobbles, while a new TonePros™ locking Tune-o-matic bridge with nylon saddles offers excellent return-to-pitch during vibrato use. To top it off, a set of Steinberger™ gearless tuners give unparalleled tuning efficiency. Experience the Elliot Easton "Tikibird" Firebird today for yourself at your authorized Gibson USA dealer, and get your hands on your own inspirational alternative.