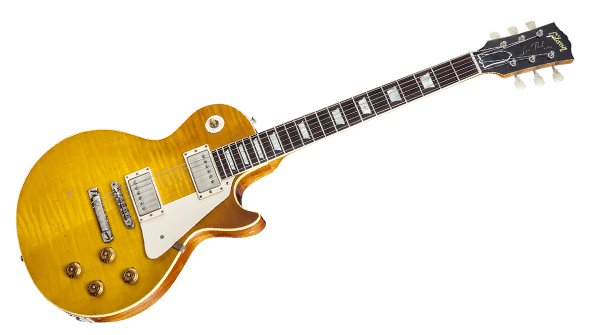 (PRESS RELEASE): In his unwavering pursuit of success, particularly through the challenges of Aerosmith’s early years, Brad Whitford displays a kinship to the ultimate tenacity of the Les Paul design: the time-will-prove qualities and heroic achievements of a guitar that wasn’t fully appreciated until half a decade after it was deleted from the Gibson catalog. In both cases, time proved that commitment can outwait fleeting opinion, and that talent and craft are ultimately undeniable. The end result: Aerosmith became one of the world’s most important rock’n’roll bands, and the Les Paul became the most significant guitar in rock history.

Brad’s original 1959 Les Paul is an absolute tone-monster, and a guitar of exceptional feel and authentic, road-worn patina—not to mention the long-time favorite playing companion of a major hit-making artist—so when he offered it up for Gibson Custom’s Collector’s Choice™ series, the opportunity resonated on every level. Following the side-by-side collaboration between Brad and Gibson Custom’s Nashville luthiers, Collector’s Choice™ #26 1959 Les Paul “Whitford Burst” captures every nuance of look, tone, and feel of Brad’s original, from its individual neck profile, to the output of its original PAF pickups, to the dents, dings, and finish fade that are all part of its “just right” vintage Burst appearance, this is the closest you could possibly come to owning Brad’s actual ’59 Les Paul, and a truly stunning acquisition for player and collector alike.

Collector’s Choice #26 will be crafted in a strictly limited run of 300 guitars (with qualifying materials ultimately determining the final number), so reserve yours now at your authorized Gibson Custom dealer.