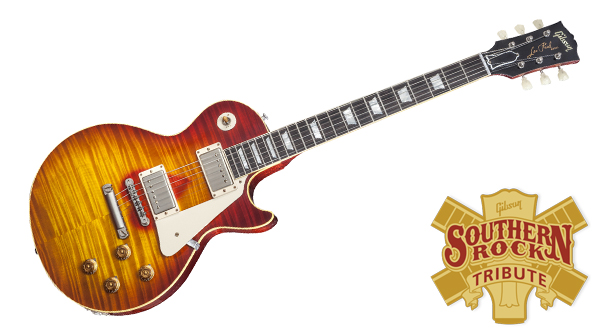 Gibson  Custom pays homage to an influential genre of music whilst supporting a very worthy cause at the same time. The Southern Rock tribute 1959 Les Paul captures everything that has been at the centre of the Southern Rock sound since the late 1960s, with sales of this limited edition beauty going to benefit the music health alliance and the Gibson foundation.

Henry Juszkiewicz, chairman and CEO of Gibson Brands said, “We are thrilled to introduce the industry’s first program to pay homeage to a music genre that played an integral role in the brand’s foundation. Through the celebration of the Les Paul, we are humbled by the wide-spread support we have received from some of the Southern Rock legends and are honored to be giving back to a music genre and its community that has given so much to our brand.”

Beginning today (May 20th), the 2014 limited-edition Gibson Custom Southern Rock Tribute 1959 Les Paul will be available through Gibson custom authorized dealers globally for $9,059 and feature special packaging to commemorate the program. Guitar aficionados will also have the opportunity to purchase one of the fifty guitars signed by the Southern Rock Tribute Ambassadors for $18,824. The Gibson Foundation will donate a portion of sales generated from this soon to be iconic Les Paul to benefit members of the music community through Music Health Alliance.