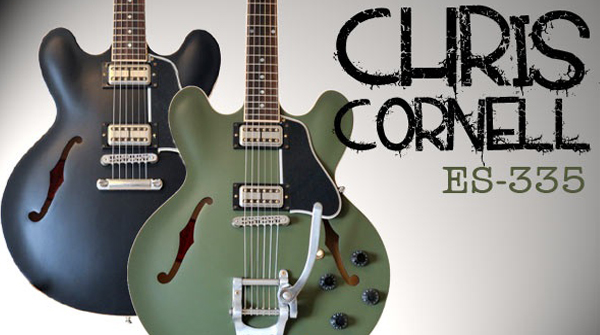 The Soundgarden frontman has designed twospecial-edition guitars that will be available at Gibson authorizeddealers worldwide as of this April.

"I am honoured to have designed a signature guitar forGibson, and look forward to using it on tour with Soundgarden inMay," said Cornell.

Known for his singing, songwriting, and guitar playing withgroundbreaking Seattle grungers Soundgarden as well as his solowork and his contribution to later bands like Audioslave and TempleOf The Dog, Chris Cornell has been a major creative force inalternative music since the mid 1980s. In addition to his powerfulfour-octave vocal range, Cornell is a distinguished guitarist, andhas long shown a love of Gibson electrics with some alternativetwists.

The Chris Cornell ES-335 from Gibson's Memphis division capturesCornell-certified looks and appointments in a great new ES-335built with full Gibson quality and tradition behind it. Thelegendary and original thinline semi-hollow electric is given aclever tweak with a pair of Jason Lollar™ Lollartron® pickups, forthat fat-but-jangly late '50s to early '60s humbucker-fired twangthat fuels Chris Cornell's tone. Your choice of an Olive Drab Greenor Flat Black finish in nitrocellulose lacquer, with a Bigsby™vibrato option on the former, extends the individuality of thisunique artist's model. From its superbly original tones to itsstunningly distinctive looks, the Chris Cornell ES-335 is apowerful new performer from Gibson Memphis.

The Chris Cornell ES-335 is constructed in the image of theoriginal "dot neck" 335s of the late 1950s, with a semi-hollow bodymade from laminated maple with a bound top and back and a solidmaple center block. The result is the perfect marriage of thetraditional archtop's looks and sonic depth, and the solidbody'ssustain and resistance to feedback. The neck is made from solidmahogany, and topped with a bound fingerboard made fromhand-selected rosewood, inlaid with simple pearloid dot positionmarkers, while the headstock carries a mother-of-pearl Gibson logoand crown inlay.

While continuing in the ES-335's humbucker tradition, the ChrisCornell ES-335 departs from the norm with a pair of Jason Lollar™Lollartrons®, made in the style of the original Filter'Tron®humbuckers of the late '50s and early '60s for a distinctivelytwangy tone, but sized for a Gibson PAF-style humbucker mounting.The result is plenty of tonal depth and warmth from the semi-hollowdesign, but with a new clarity and crispness from the Lollartron®pickups, with excellent hum rejection. The pickups are routedthrough the traditional three-way switch and individual volume andtone controls and topped with clear knobs for a distinctivelook.

Soundgarden will embark on the second leg oftheir sold-out North American tour on May 3 in Atlantic Cityinsupport of new album 'King Animal.'