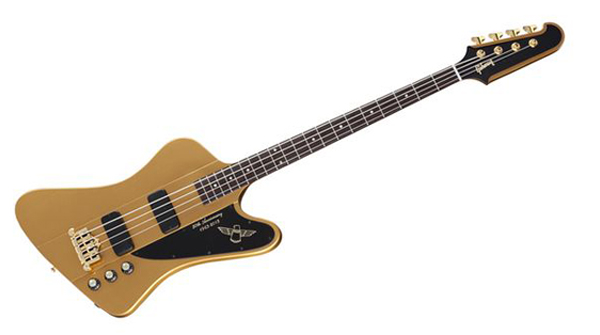 As the fierce four-string partner to the Firebird guitar lineintroduced in 1963, the Thunderbird bass has long been a stylishalternative-both onstage and in the studio-for adventurousbassists, Now Gibson USA celebrates the Golden Anniversary of thisraging tone monster with a stunning tribute to the breed: the 50thAnniversary Thunderbird Bass.

Thunderbird style, "through-neck" construction, a pair of mightyT-Bird Bass pickups and a rock-solid Thunderbird three-point bridgemake the 50th Anniversary Thunderbird Bass the most playable andbest-sounding bass on the scene. This commemorative bass wears agorgeous Bullion Gold finish in high-gloss nitrocellulose lacquer,and a pick guard that's hot-stamped with a gold T-Bird logo and"50th Anniversary 1963-2013." Add it up, and it's both a fittingtribute to a special anniversary, and a thunderous way to lay downthe rumble in any style of music.

The core of this exceptional bass lies in its "through neck"construction, with the neck and body core crafted from the samerugged multi-ply mahogany tone wood blank for unparalleled strengthand sustain. It takes more work to build a bass this way, but theeffort pays off in every aspect of the instrument's feel andresponse. Two solid mahogany body wings complete the iconicThunderbird package, which cuts a figure recognized on stages theworld over. The neck is carved to a comfortably rounded profilethat measures 0.790" at the 1st fret and 0.930" at the 12th. It istopped with a 20-fret fingerboard made from Grade-A rosewood,inlaid with pearlod dot position markers.

The firm sonic foundation of the 50th Anniversary ThunderbirdBass is cranked through a pair of extremely versatile contemporaryT-Bird Bass pickups, with ceramic magnets for enhanced punch andclarity. Individual volume controls and a master tone control letyou blend pickups as desired for a wide range of sounds.

Strings are anchored at the body end by a rock-solid three-pointThunderbird bridge with individually adjustable saddles, andhigh-quality Grover tuners at the headstock-all gold-plated tomatch the commemorative look of the 50th Anniversary ThunderbirdBass. Its black plastic pickguard is hot-stamped in gold with theThunderbird image and anniversary years.