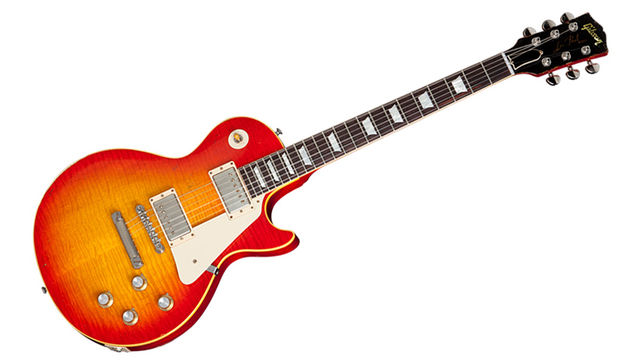 Joe Walsh is a rare and distinguished member of the rock androll élite who has managed to retain his distinctive and instantlyrecognizable tone and playing style through the course of a careerspanning five decades. From joining the James Gang in 1968, to hislong and ongoing solo career, to his pivotal role as lead guitaristwith the Eagles, that thick, rich, sustaining Les Paul tone hasremained the centerpiece of Joe's sound. Now the look, feel, andtone of his own exalted original 1960 Les Paul Standard has beenrecreated in exacting detail by the world-renowned craftspeople ofGibson Custom as the Joe Walsh 1960 Les Paul Standard.

Working closely with Joe Walsh, the guitar's current owner, andthe guitar itself, Gibson Custom has analyzed this rare original'Burst in exacting detail, reproducing it with unprecedentedprecision in a Limited Run totaling 250 guitars: 50 hand-aged byTom Murphy and signed by the artist, a further 75 Murphy aged, and125 treated to Gibson's proprietary VOS processes. The result is adead-on 1960 Standard that not only offers every drop of thatlegendary Joe Walsh tone, but which also presents the magical lookand feel of this beloved artist's guitar.

From the carefully hand-selected maple top, to the accurate"tangerine burst" finish, to a neck profile measured precisely fromthe original guitar, to the Custom Bucker PAF-style pickups andperiod-correct electronics, the Joe Walsh 1960 Les Paul Standard isa stunning recreation of one of the most desirable electric guitarsever made. In addition, as a member of the 2013 class of Historicinstruments, the Joe Walsh 1960 Les Paul features Gibson Custom's20th Anniversary Specifications: genuine aniline dye back andsides, historically accurate truss rod assembly with no tubing, hothide glue neck joint, historically accurate binding color, and 1piece Rosewood fingerboard. All together, it presents a rareopportunity to own the closest thing possible to this historicartist guitar. Reserve yours now at your authorized Gibson Customdealer.

Gibson Custom lays down the foundation for the Joe Walsh 1960Les Paul Standard by marrying a solid, lightweight, one-piece,Grade-A mahogany body with a top carved from maple that has beenhand selected to match the look of Joe's original guitar. A thinnitrocellulose "tangerine burst" finish and your choice of handaging by Tom Murphy or Gibson's VOS treatment complete theauthentic look and feel. A quarter-sawn Grade-A mahogany neck iscarved to an accurate 1960 profile that measures 0.800" at the 1stfret and 0.854" at the 12th, and topped with a one-piece, Grade-Arosewood fingerboard with trapezoid inlays made from period-correctcellulose nitrate, and a nylon 6/6 nut at the top end.

To ensure that the Joe Walsh 1960 Les Paul Standard sounds everybit as sublime as it looks, Gibson Custom loads it with a pair ofCustom Bucker pickups, made with Alnico III magnets and wound toprecisely match the specs of Joe's original PAF humbuckers. Thetraditional four-knob Les Paul control complement includes "bumblebee" tone capacitors on the tone potentiometers, and a three-waypickup selector.

The accurate ABR-1 Tune-o-matic bridge is set up with itssaddles slanted precisely as found on Joe's original guitar, andpartners with a lightweight aluminum stopbar tailpiece. A set ofGrover™ kidney-button tuners, a common upgrade on guitars of theera, offer smooth and precise tuning. The body and fingerboardbinding, pickguard, truss-rod cover, switch ring, and controlcavity covers are all period-correct for shape and color, and theguitar's controls carries four gold Top Hat knobs with silverVol/Tone inserts.