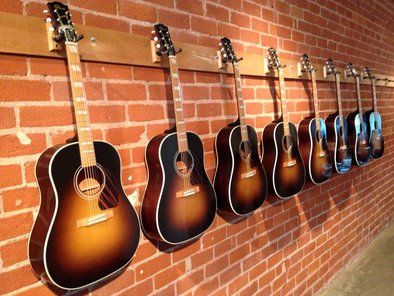 Gibson Brands, Inc. has announced the debut of the 2014 Woody Guthrie London House Model Southern Jumbo, honouring the music and legacy of the great American folk music legend, Woody Guthrie. The eight guitars were handmade using wood from Guthrie’s childhood home, the London House, in Okemah, Oklahoma.  Guthrie’s musical legacy spans hundreds of songs and is best known for his iconic “This Land is Your Land,” and he has been a major influence for such legendary songwriters as Bob Dylan, Kris Kristofferson and Bruce Springsteen.

These exclusive collectables will go on auction May 1, 2014 at 10:00am EST with details at www.thishouseisyourhouse.org.

All proceeds from the auction of the guitars will go directly to Woody Guthrie London House, Inc., to be used exclusively for the purpose of reconstructing and preserving the legend’s childhood home.

“Gibson is proud to have the opportunity to honor the great Woody Guthrie by hand-making these eight outstanding guitars. Woody Guthrie and his legacy hold such an important part in musical history and acoustic music as a whole. We are honored to partner with the This House is Your House campaign to help restore the home to its former glory so that generations to come will be able to honor his legacy and artistic genius.”

The acclaimed luthiers of Gibson’s Montana acoustic facility have crafted the fingerboards and bridges from the red oak floor joists of London House, adding them to the foundation of a solid AA-Sitka spruce top and solid Honduran mahogany back and sides that together blend tonal sweetness and outstanding projection, characteristics which have made the Southern Jumbo popular with solo folk singers and contemporary singer-songwriters alike since the 1940’s. Additionally, luthiers added a luscious Vintage Sunburst finish, period-correct fire stripe pickguard, a solid mahogany neck with vintage V profile, split-parallelogram fingerboard inlays, a traditional banner headstock decal. The Woody Guthrie London House Model Southern Model embodies the best of golden age in American acoustic music.