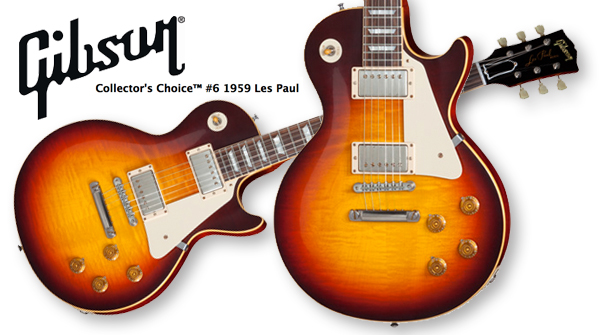 Gibson Custom has announced the release of Collector's Choice #61959 Les Paul #9-1918. This rare and highly prized 1959 Les PaulModel is described as an "extremely clean original example", andexhibits many of the most desirable traits of 1958-1960 LesPauls.

Guitars in the Collector's Choice Series aim to bring playersand collectors closer to owning a specific, existing vintage LesPauls through exacting study and measurement of the originalinstrument. Using precise digital scanning of the woods, and theskill of the luthiers of Gibson Custom, each Collector's Choiceguitar represents a detail-perfect recreation of the look, feel,tone, and vibe of an original "burst."

"I call it my 'Number One' or 'Desert Island' guitar becauseit's by far the best guitar I've ever owned, held, or heard," saysMike Slubowski, owner of the original 1959 Les Paul. Collector'sChoice #6 1959 Les Paul #9-1918 is being made available in alimited run with a maximum of 300 examples, with the availabilityof qualifying materials ultimately determining the finalnumber.

To complete the sonic accuracy of the original, Gibson Customcarefully measured the pickups in Mike Slubowski's guitar andrecreated a set of Custom Buckers wound to precisely the samespecs. Details include Alnico III magnets and 42 AWG enamel-coatedwire wound around distinctive "zebra coil" bobbins, which arehidden by gently aged nickel-plated covers. These pickups' renownedblend of depth and clarity is complemented by the traditionalpairing of a traditional ABR-1 Tune-o-Matic bridge and lightweightaluminum stopbar tailpiece, both nickel plated and agedappropriately, and a set of gently aged nickel reissue green-keytuners.

This run of guitars is limited to only 300 models and representsthe closest most of us will ever come to owning a '59 Les Paul.Prices start at a hefty $8939 (that's roughly £5500), but that'snowhere near the astronomical prices actual late '50s models arecommanding these days.

For more information on the Collector's Choice series and the #61959 Les Paul,  visit Gibson's website here