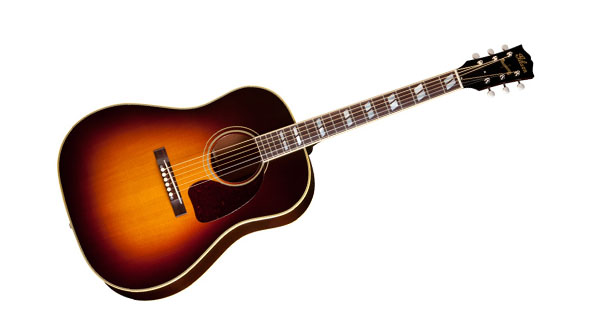 In 2010, Crow modified her entire live acoustic guitar line-up with the same new and advanced pickup system used in the Gibson Jackson Browne model released earlier that year. After an extensive in-studio comparison of guitars and pickups, the idea for her Southern Jumbo Special Edition was born.

Crow's new Southern Jumbo is built for power and projection with wider X-bracing on the red spruce top. With mahogany back and sides, the combination of wood and pattern bracing gives this SJ a dynamic and responsive tonal range unlike any Southern Jumbo Gibson has built. The acoustic-electric version of this guitar has the same incredible stereo pickup system used in the highly-acclaimed Jackson Browne Model.

Traditional appointments like Ivroid Waverly tuners, vintage Gibson script logo and banner decal, a hand-beveled pickguard, bound fingerboard and a custom classic sunburst finish, result in a beautiful guitar with a classic appearance. The onboard electronics unleash a new level of acoustic performance capability never before achieved in an acoustic pickup.

"Having tested many internal pickup systems on many guitars," said Robi Johns, project director with Gibson Acoustic, "we've discovered a new realm we never thought possible for live performance natural sound. This guitar, combined with this pickup system, can change the way players interact with their instrument on stage. It's very exciting. Our goal is to get to the point where, as a player, you forget that you're plugged in."