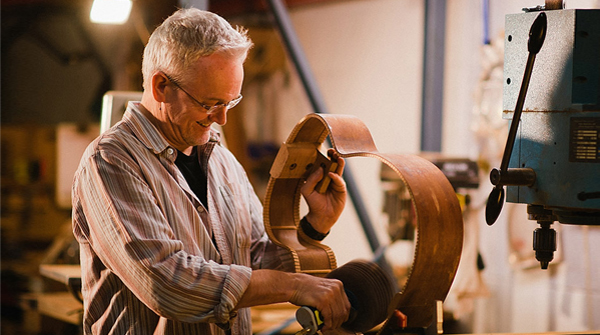 Master luthier, George Lowden of Lowden Guitars has been dedicated to making acoustic guitars for the last 40 years.

Despite Lowden's world-renowned status, operations are based in the picturesque surroundings of rural Co Down where George and his team create, design and hand-make these iconic instruments.

George, who has been making guitars since 1974, cited Lowden's biggest break in 1997 when Eric Clapton, who owned his own Lowden, performed with it at the 1997 Grammy Awards at Madison Square Garden.

“The thing that made me most proud was the time that he (Clapton) used his Lowden when he was getting his Grammy award, but also the fact that he recorded a couple of albums almost completely with it - so that was great as well,” George said.

The model was a 038 from 1996 which is described as a “two-piece Brazilian rosewood back and sides bound in boxwood, cedar top with abalone pearl inlay”.

Seven years later the instrument was auctioned by Christie’s in New York and sold for $41,825.

Born in the seaside town of Bangor, George now lives and works in Downpatrick, and couldn't be happier.

“I love living down here and have had the workshop here for the last 10 years. It just so happened that’s where we settled. I lived around Bangor and Holywood until I was 40 but then moved down here, have stayed here and we will stay here.”

On the future of Lowden, he said:

“The market has been steadily building for us and the demand has been building, so thankfully we are finding it very good and expanding slowly."

“Most of the family are now involved one way or the other and that’s a good thing because I’m now 63 and won’t be able to work forever.”

In celebration of George’s 40th year in business, Jon Gomm and Thomas Leeb, to name a few, took part in a concert at the Crescent Arts Centre in Belfast over the weekend.