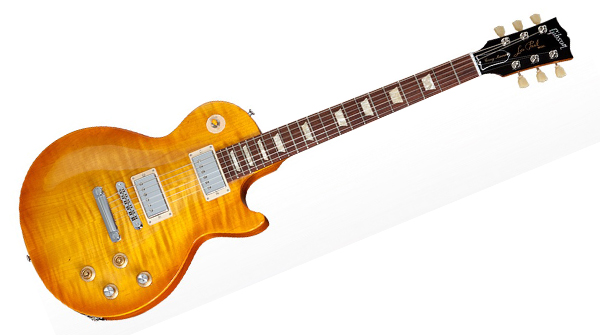 From his scorching playing with Skid Row and Thin Lizzy to hisincendiary solo work, Gary Moore produced some of the most powerfulguitar performances known to stage and studio from the mid '70sright up until his untimely death in 2011. Throughout his career,Moore virtually defined high-octane blues-rock, coining a signaturetone that thousands have sought to emulate. Across three decades ofplaying, his weapon of choice remained the mighty Les Paul, one ofwhich was the legendary '59 Burst originally owned by Fleetwood Macguitarist Peter Green.

The Gary Moore Les Paul Standard is rooted in Les Paul tradition,with a top carved from figured Grade-AA maple, and a back craftedfrom Grade-A mahogany. To better show of the lusciousnitrocellulose Lemonburst finish, the body carries no binding orpickguard. It is strategically weight-relieved to render this asuperbly comfortable guitar. The neck is made from quarter-sawnGrade-A mahogany and carved to a rounded '50s profile that measures0.818" at the 1st fret and 0.963" at the 12th. It is topped with anunbound Granadillo fingerboard with 22 medium-jumbo frets andtraditional acrylic trapezoid inlays.

The two BurstBucker Pro pickups on the Gary Moore Les PaulStandard blend the best of Gibson's hallowed PAF humbuckers withthe versatility required by today's high-gain rockers. Thesepickups are made with Alnico V magnets and wound with 42 AWGwire-with extra turns in the bridge pickup's coils for a hotterlead sound-but are wax potted to withstand high volume levelswithout microphonic squeal. The neck pickup is reversed in itsmounting, in recognition of a similar modification to Peter Green'sLes Paul. The guitar carries the traditional control layout, withOrange Drop tone capacitors, and mismatched amber and gold top hatknobs on the neck and bridge pickup controls respectively.

Wrap it up in a vintage-brown Gibson hardshell case with GaryMoore signature, owner's manual, adjustment literature, and GibsonUSA's Limited Lifetime Warranty, and it's a fitting tribute to theman himself.

In Issue 17 of Guitar Interactive Magazine we featured the 'The most valuableLes Paul in the World,' the iconic '59 Les Paul Standard,' whichthe newly released Gary Moore Les Paul Standard was originallymodelled on.