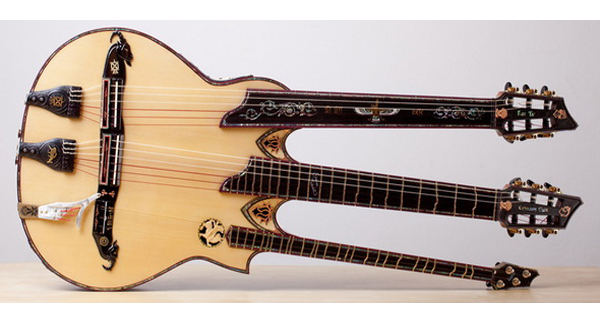 Approximately two years ago, Shahab Tolouie began therealization of his long-term idea to gather the diverse strands ofpersian, jazz and flamenco together in a manner that incorporatesmodern technologies in one instrument to attain the precise timbresthat are optimal for live performance of his original style -Persian-Flamenco fusion.

The name is derived from "fuse" - English for "fusion" and "tar"- Farsi for "strings"; hence 'fusion of strings'. The nicknameLucifer is that of the mythological morning star, the bearer oflight.

It took a year and half for two luthiers Mehr & Owrang(Crimson Oath) to build the FuseTar. It is made of thirteendifferent types of wood and weighs 2.1 kg. With an acoustic chamberapproximately 2cm larger than that on a regular guitar, the FuseTarpossesses three necks. The uppermost is a fretless neck, whichmakes possible to play the quarter-tones peculiar to eastern music.The middle neck is the 'guitar neck', a combination flamenco/jazzguitar configured with the "true temperament" fretting technology,which produces more accurate intonations and longer sustain than anormal guitar and is used, for example, by John McLaughlin andSteve Vai. The third neck is a Persian 'setar neck' with fourstrings fretted for quartertones, a traditional instrument whoseroots stretch back 2,000 years. This is the first time atraditional Persian instrument has been modernized with the fixed,"true temperament" fretting system.

At the same time FuseTar is a unique work of art - carefullydecorated by elements from three the most significant historicalperiods of Persian Empire (Achaemenid: the Lion-griffin - aprotector from evil, Parthian & Sassanid: Derafsh Kaviani -symbol of independence and freedom. Lion and Sun - always beenassociated with Persian royalty). And Faravahar - the best-knownsymbol of Zoroastrianism.