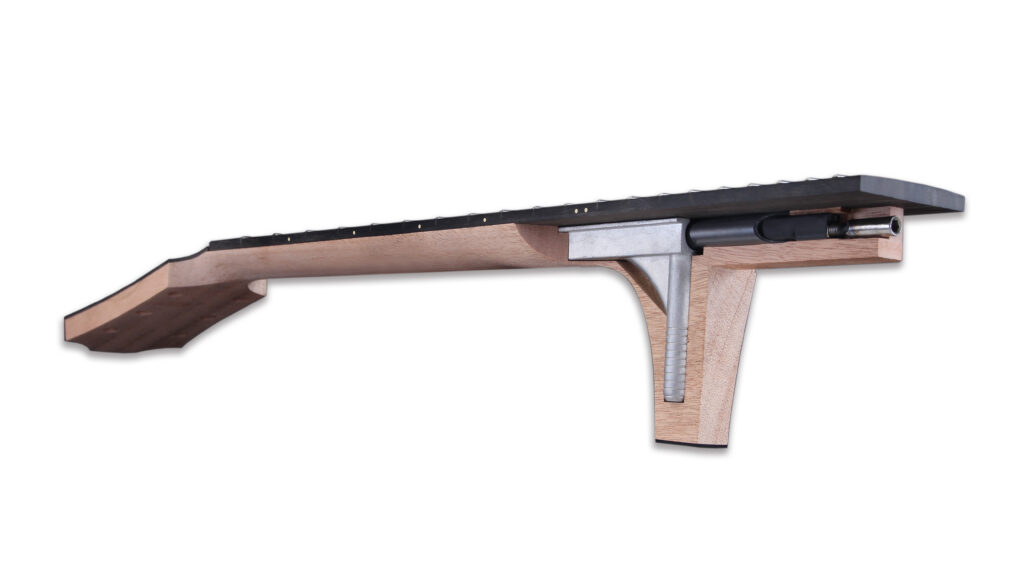 Furch Guitars (Furch), one of the world's leading manufacturers of premium quality guitars, has completed four years of research and development conducted with the aim of improving the neck construction. The result of the process is a revolutionary design, branded as the Furch CNR System (Furch Composite Neck Reinforcement System), which increases neck rigidity, stability, and durability. The new design has already been incorporated into the production process, and all guitars with serial number 68,294 and higher feature the redesigned neck.

Guitars made exclusively from solid woods are among musical instruments that are highly sensitive to the environment in which they are used. The most delicate components of a guitar include the top plate and the neck. While exposing a guitar to unfavorable conditionsmight cause the top to bulge or crack, the neck is often deformed and twisted, a problem that is highly detrimental to playability and sound clarity. In many cases, repairing a deformed neck is impossible.

The neck joint is the most complicated structural element in the guitar construction because it attaches the neck to the body – two components that have significantly different physical properties, rigidity in particular. If the neck is not properly designed and if it is poorly made, the guitar will suffer from poor playability and inferior sound quality.

During many years of testing, Furch's specialists have found that in as many as 40% of cases, guitar deformations caused by pressure exerted by the strings (the upward pull in particular) are due to the pliability and flexibility of wood, the predominant material used in the construction of the neck joint. The remaining 60% of deformations are caused by the bulging of the top plate in response to changes in humidity in the environment in which guitars are kept.

Because the neck is one of the most important construction elements of a guitar, the quest for devising a neck design that is as stable as possible has been an enormous challenge throughout the history of guitar building.

Following four years of hard work, the Furch's R&D Division has devised and implemented into the production process a design that reduces by a whopping 90% the risk of neck deformations caused by unsuitable external conditions or the natural flexibility of wood. The revolutionary innovation features a newcomposite reinforcement that extends significantly neck durability and consequently the lifespan of the guitar as a whole.

The new Furch CNR System technology brings together three key construction elements, each of which plays an essential role:

By combining an innovative neck design with highly precise manufacturing, Furch has succeeded in achieving previously unheard of stability of the neck joint, which facilitates high neck rigidity and precise adjustability of the neck bow along the entire lengthof the fingerboard as well as excellent transmission of sound. In addition to these benefits, the new design also reduces neck weight.

"I'm very proud that in addition to an exceptional sound and precise manufacturing, our guitars now feature a fundamentally improved neck design – a parameter which the player cannot see directly and needs to rely on the manufacturer's repute and guarantee of high quality," said Furch Guitars CEO Petr Furch. "This revolutionary system has become the new standard in the construction of all Furch guitars, and it complements the variety of major technological innovations we offer and back with our three-year warranty."

The Furch CNR System neck joint design is available in all Furch guitars with serial number 68,294 and higher.

For more information on visit www.furch.cz